(RNS) Since the Boy Scouts of America decided to accept transgender youngsters, there appears to be a growing market for a different kind of scouting group.

The BSA does not require troops chartered by houses of worship to accept children who do not identify with their birth gender. Nevertheless, the website of Trail Life USA, which bills itself as a Christian alternative, has had trouble keeping up with the people checking an online locator map for troops across the country since the Jan. 30 announcement.

“We’ve seen tremendous response,” said Trail Life CEO Mark Hancock in reference to the surge of membership inquiries. “Where many people would say that they’re leaving Boys Scouts, we have many others that are saying that the Boy Scouts left them.”

Trail Life currently has about 26,000 members. New troops have to go through a chartering process that can take weeks, but the surge of traffic to its website and thousands of new likes on its Facebook page suggest its numbers are about to swell.

“We’ve pushed a few employees from part time to full time and pushed some from full time to overtime to handle the inquiries from troops around the country that are looking for an organization that’s more aligned with the original timeless values of Boy Scouts,” Hancock said.

Since Trail Life began in January 2014, its staff has doubled to 12, its mostly evangelical church-based troops have increased from 500 to 700 and it has moved from a virtual office to the 127-acre campus of a former boys home in Belton, S.C. Participating boys, called “Navigators” and “Adventurers,” have outdoor adventures, earn badges and can seek the Horizon Award that Trail Life considers a parallel to the Eagle Scout rank. 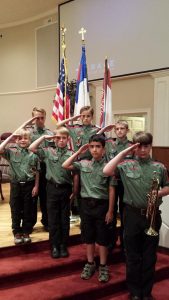 Many of their troop numbers correspond to Bible verses. Troop 110 is particularly popular, after Colossians 1:10 — “So that you may live a life worthy of the Lord and please him in every way” — on which the organization’s “Walk Worthy” motto is based.

The BSA, which has nearly 2.3 million youth members, said it has received letters of support since its decision from a range of religious organizations — which charter the majority of Scouting units — including Reform Jews, United Methodists, Catholics and Mormons.

“If a religious organization declines to accept a youth or adult application based on their religious beliefs, we ask that they please notify their local council so that a unit open to accepting the individual can be offered as an option,” said BSA spokeswoman Effie Delimarkos.

Some religious groups have used cautious language about their next steps concerning the scouting organization after the decisions it has made in recent years to accept gay Scouts, gay leaders and now transgender youngsters.

The Mormon church has said it is “studying” the BSA’s announcement but noted the organization’s assurance that religious groups can organize their troops in ways consistent with their religious beliefs.

The Catholic Archdiocese of St. Louis said it was “evaluating” the effect the policy would have on its troops.

“We will continue to be in dialogue with Boy Scouts of America in hopes that they will recognize their error and rededicate themselves to serving the needs of the boys in the organization,” the archdiocese said. 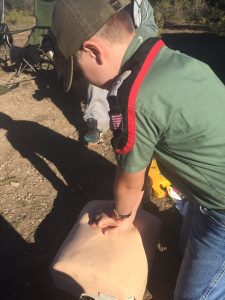 Ted Spangenberg, president of the Association of Baptists for Scouting, said he hopes groups such as Trail Life, as well as mission-oriented programs like the Southern Baptist Royal Ambassadors, will continue to thrive.

“These can be effective in helping churches and their families disciple the youth in their congregations,” he told RNS. “But, the truth is, these organizations just don’t have the brand awareness and breadth of program and appeal that the Boy Scouts still has with the ‘un-churched’ of America.”

“Faith groups chartering Boy Scout units need to realize that the latest change only impacts them as they choose for it to do so,” said R. Chip Turner.

Trail Life’s Hancock said his organization generally does not focus on the Boy Scouts but he thought it needed to be vocal about the latest decision, which he called “harmful to boys.”

“We don’t want boys psychologically, spiritually, and possibly physically scarred by the confusing message being presented by the BSA,” he said in a statement posted on Trail Life’s website. “We don’t want boys or girls subjected to compromising situations on outings in an environment where reasonable precautions are no longer enforceable.”

Trail Life’s website includes a “purity” section in its values statement: “We are to reserve sexual activity for the sanctity of marriage, a lifelong commitment before God between a man and a woman.”

It describes membership as “designed for biologically male children under the age of 18.”

Other conservative Christians opposed the BSA’s latest move, with Fox News’ Todd Starnes calling it “a complete capitulation to the gender and sex revolutionaries” and Southern Baptist ethicist Russell Moore tweeting “This is crazy, IMO.”

More liberal denominations, including the Unitarian Universalist Association and the United Church of Christ, welcomed the move, pledging to work with the BSA as it implements the new policy. UUA President Peter Morales, whose church renewed a formal relationship with the BSA after it welcomed gay Scouts and leaders, called the latest juncture “a significant step in the direction of greater inclusion.”

This article originally appeared on ReligionNews.com and was written by Adelle M. Banks.