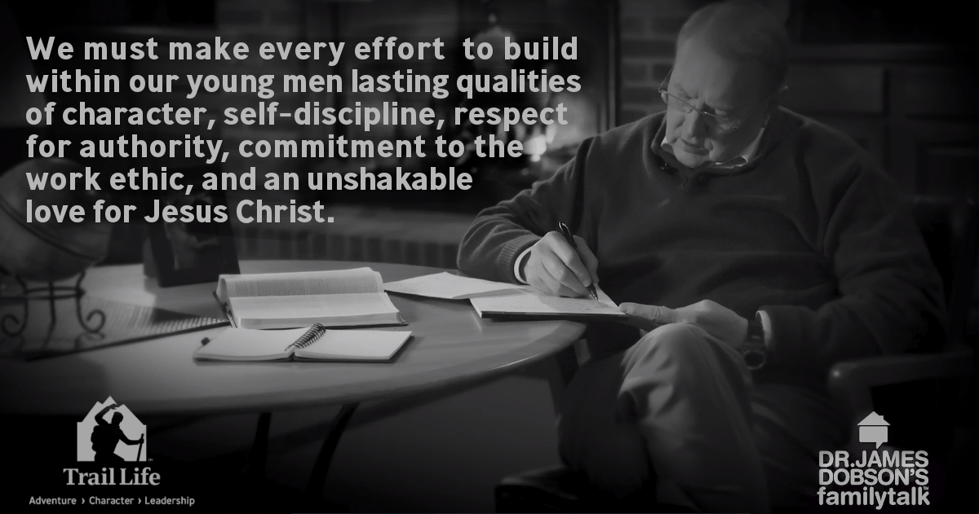 We must make every effort to interdict those dangerous influences, and to build within our young men lasting qualities of character, self-discipline, respect for authority, commitment to the work ethic, and an unshakable love for Jesus Christ…Get your boys into a good program that offers Christian mentoring for them, such as Trail Life.

Dr. James Dobson has been a firm supporter of Trail Life since its birth. We noted with great interest that his letter concerned the need for strong, loving, godly fathers and mentors as the only effective remedy for the current epidemic in Western culture of murderous violence among young men. We, therefore, present an abridged transcript of his masterful letter.

It is impossible to overstate the anguish and grief suffered by hundreds of families and friends who have lost loved ones at the hands of wanton killers. And there are even more who are dealing with the trauma and pain of injury, both physical and emotional, stemming from these tragic events. Clearly, America is under siege, and the nation is rightly demanding answers.

Most of the explanations put forth by presidential candidates, many politicians, and liberal commentators have been inadequate and unhelpful. I think there is a more plausible answer.

Though each situation is unique, most of the murderers had one thing in common. They were boys or young men who grew up in dysfunctional families without caring fathers in the home. That is what Mark Meckler addressed in an article published in Patheos. These are his conclusions:

Fatherlessness is a serious problem. America’s boys have been under stress for decades. It’s not toxic masculinity hurting them, it’s the fact that when they come home there are no fathers there.

Retired Lt. Gen. William Boykin said in an interview with Miguel Moreno of The Epoch Times:

The fact is we have an epidemic of absentee fathers in the home and a disintegrating family structure in America. [It] is a major cause for what we see happening in these mass shootings. We have a generation of young people who have no mentors. There is no one to instruct and encourage them, or to help them on their path to manhood or womanhood.

Whereas, girls have a readily available model after which to pattern feminine behavior and attitudes (except when daughters are raised by single fathers), boys living with single mothers are left to formulate their masculine identity out of thin air.

Sociologist Peter Karl believes that because boys spend up to 80 percent of their time with women, they don’t know how to act as men when they grow up. When that happens, the relationship between the sexes is directly affected.

I am convinced that the institution of the family is the ground floor of civilization. Everything of significance to the social contract depends on the stability of that foundation. If it is weakened or undermined, as we are seeing throughout Western culture, the entire superstructure can come crashing down. That is what we appear to be witnessing on every level.

I believe the future of Western civilization depends on how we handle this present crisis. We, as parents, are raising the next generation of boys who will either mature to be honorable family men, or they will be a liability at home and in their communities. Men are the bridges to the future. Nations that are populated largely by immature, immoral, weak-willed, cowardly, violent, and self-indulgent men cannot and will not long endure. We must make every effort to interdict those dangerous influences, and to build within our young men lasting qualities of character, self-discipline, respect for authority, commitment to the work ethic, and an unshakable love for Jesus Christ. The pursuit of those objectives led me to undertake the writing of my book, Bringing Up Boys. It is my cause célèbre.

At the risk of being redundant, a father holds awesome power in the lives of his children, for good or ill. Families have understood that fact for centuries. It has been said, “No man stands so tall as when he stoops to help a boy.” Another wise observer said, “Tie a boy to the right man, and he almost never goes wrong.” They are both right. When asked who their heroes are, the majority of boys who are fortunate enough to have a good father will say, “It’s my dad.” On the other hand, when a dad is uninvolved—when he doesn’t love or care for his kids—he creates an ache, a longing, that will linger for a lifetime. Again, without minimizing how much girls need their fathers, which we also acknowledge, boys are constructed emotionally to be dependent on dads in ways that were not understood until recently.

What are we to do with the social crisis we are facing? Well, I hope I have influenced some overworked guys out there who haven’t had time for their boys and girls. When you sit where I sit, you will regret pouring every ounce of energy into business or a profession. Don’t neglect those kids around your feet. This might be the best advice you’ve ever been given.

To the single mother, I want to urge you to find a strong role model for your boys. Get your boys into a good program that offers Christian mentoring for them, such as Trail Life, or a good church program. Find a godly coach or another organization that is Christian through and through. One way or another, you need to locate a good man who can show your lad how a guy thinks and acts—a man with character and courage. He’s out there. Ask the Lord to help you find him.

This has been a hard letter to write. I hope you found it helpful.

God be with you,

Let us not raise that generation of boys who don’t know how to become men because they didn’t get to see it done by godly fathers and mentors. Let us instead raise generations of young men to be courageous followers of Christ, to be responsible and loving husbands and fathers, and to serve their churches, families, and communities. Trail Life USA offers a unique opportunity for boys to become just such men. In addition to getting your own boys involved in a Troop, why not volunteer, become a leader, or even start a Troop? You would be playing a vital role in the lives of boys. As Dr. Dobson illustrates, godly men are needed now more than ever.