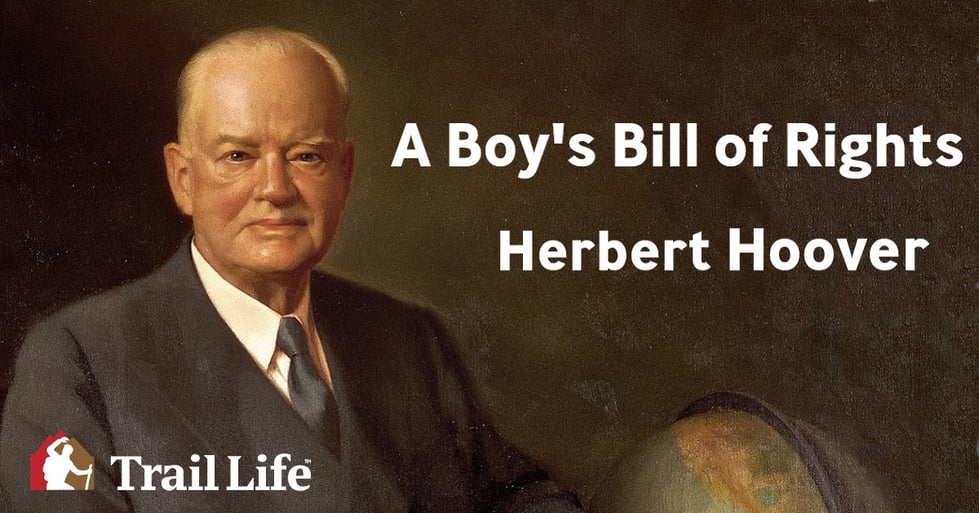 There are two jobs for American boys today. One is being a boy. The other is growing up to be a man. Both jobs are important. Both are packed with excitement, great undertakings, and high adventure.

Together with his sister, the boy is our most precious possession. But he presents not only joys and hopes, but also paradoxes. He strains our nerves, yet he is a complex of cells teeming with affection. He is a periodic nuisance, yet he is a joy forever. He is a part-time incarnation of destruction, yet he radiates sunlight to the entire world. He gives evidence of being the child of iniquity, yet he makes a great nation. He is filled with curiosity as to every mortal thing, he is an illuminated interrogation point, yet he is the most entertaining animal that is. He is endowed with a dynamic energy and an impelling desire to take exercise on all occasions. His primary instinct is to hunt in a pack and that multiplies his devices. He is a complete self-starter, and therefore wisdom in dealing with him consists mostly in what to do with him next. The whole world is new to him. Therefore his should be a life of adventure, of discovery, of great undertakings. He must spend much time, if he is to expand, in the land of make-believe.

It is his privilege to have been born in America. Here boys live under a democracy where they have more opportunity of becoming a mayor or a policeman or an editor or even a banker than in any other country. So they have some privileges. The Constitution provides him with the inalienable right of liberty, and the pursuit of happiness. We are not so much concerned at the moment with his liberties as guaranteed by the Bill of Rights as we are with his processes for the pursuit of happiness. He will find the tragedies of both liberty and happiness when he becomes a taxpayer. He and his pack can go on this hunt for happiness either constructively or destructively.

Our job is to make a place where they can let off steam in such a way as to give them constructive joy. We must find their occupational bent so they can start right in life. And we must supplement the moral training of the family and of the church in that other great high school of morals—that is, adventure. Otherwise they wilt like wild flowers. And otherwise also they go in for destructive joy. Boldness, independence, the pioneer spirit, the courage to take chances--these must not be suppressed, but they must be directed to constructive joy.

A Boy's Bill of Rights

Because boys must grow up into the land of realities, I think there should be a special Bill of Rights for boys:

These are the rights of boys and it’s up to us, as adults, to see that they have them. The glory of the nation rests in the character of her men. And character comes from boyhood. Thus every boy is a challenge to his elders. It is for them that we must win the war – it is for them that we must make a just and lasting peace. For the world of tomorrow, about which all of us are dreaming and planning, will be carried forward by the boys of today.

The article above was compiled and edited from the following sources: