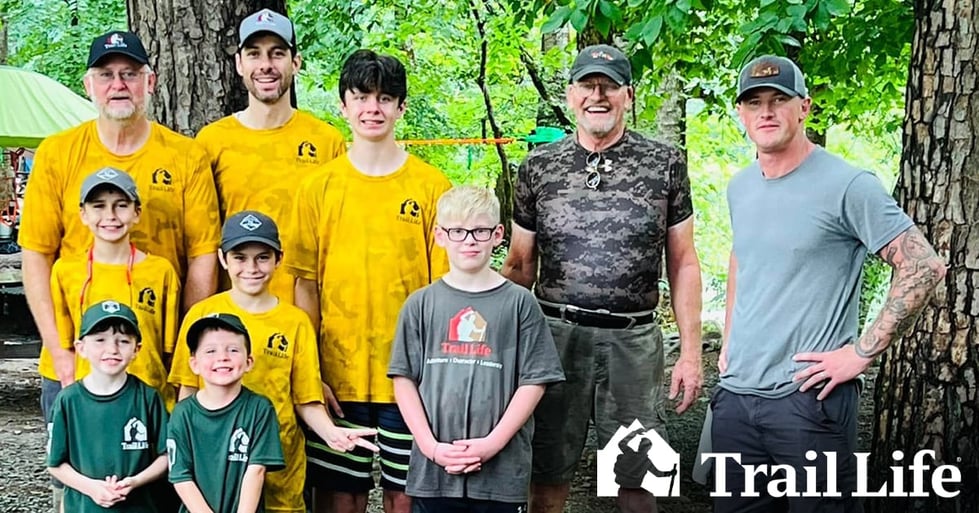 Trail Life mentors inspire young boy not only to find the will to live, but to help others around him

In a society where the lines between masculine and feminine are constantly blurred, brash boyish bluster and boisterousness is losing its place. Feeling unappreciated, too boys are losing their identity. Traditional needs like physical challenge, competition, risk-taking, action, and adventure are being discounted and boys seeking to fill these needs are punished, diagnosed, or written off as unruly, difficult, or perhaps toxic.

Trail Life USA, the largest Christ-centered, boy-focused scout-type organization in the country, is familiar with this struggle for boys and can provide a solution. In the fight to provide boys with unique programming that celebrates boyhood, Trail Life utilizes outdoor adventure and personal relationships to speak to the heart of a boy and and to guide him in his walk with Christ.

Mark Hancock, Trail Life CEO, commented, “When boys feel like they are relegated as ‘less than’ due to unappreciated gender differences, they begin to wonder where they belong in a society that seems to discount their abilities. Trail Life USA provides a boy-focused program and activities designed to let boys be boys, accentuating their strengths and allowing them to feel understood and appreciated.”

Hancock continued, “It seems everywhere a boy goes, he’s expected to comply with unrealistic social norms. The consistent message he gets is that he needs to ‘sit still, be quiet, do what he is told, and behave like the girls.’ But boys are not defective girls. They are created differently on purpose for a purpose. Properly channeled and intentionally challenged, the exuberance, drive, and daring of healthy boys is exactly what our society needs.”

In a system that fails to acknowledge that boys are not just like girls, boys are increasingly diagnosed with disorders and are falling behind their female counterparts in nearly every academic category. This trend continues into college where 60% of students are female. Even more tragic than the academic difficulty is the impact on the mental health of boys and men. Today, men account for four out of five suicides in America and twice the drug-related deaths as compared to women. The most rapidly growing suicide rate demographic is boys from the ages of ten to 14. One mother recently wrote to share how her son was almost one of these statistics:

“Dealing with ADHD, depression, and anxiety, my son was struggling at school and at home. Daily outbursts, disciplinary problems, and panic attacks forced us as parents to make the hard decision to pull him out of traditional school. A constant cycle of being in trouble with teachers, church leaders, and parents left him questioning his own value. At ten years of age, he decided that he was so broken and hopeless that the world would be better off without him. Last October, he attempted to take his own life and was admitted to the emergency room at the children’s hospital because of injuries sustained in that attempt.

“Then my son began attending Trail Life. It was the first time that he felt understood and accepted by authority figures (the Trail Life leaders). In a world that had always attempted to squash his character, he has been encouraged to see a purpose in his ‘boy-ness.’ He has heard consistently that God created him the way he is and that he is loved. He has been encouraged that the future holds a purpose for him — one that will utilize his courage, his sensitivity, and his passion. He has been inspired intellectually and spiritually. Most importantly, he feels part of a community where he respects and admires the leaders, and has friends.”

In the active learning environment at Trail Life, her son has been able to shine. In the past six months, he has been hiking and camping, learned first aid, become proficient in lighting a fire without a match, and built rockets with his Troop.

The mother commented on these skills her son learned at Trail Life, stating, “Because my son learned first aid with his Troop, I still have both of my children. Last Sunday, I was driving on the freeway when my daughter, who is two years old, choked on a snack. She couldn’t breathe. I was stuck driving in traffic in the HOV lane, where I couldn’t pull over. My son was able to use the skills he learned at Trail Life to give his sister the Heimlich maneuver, and she coughed up food and was able to breathe. He saved her life and displayed the level-headed, calm, and confident skills he needed to save his sister. I am so proud of him, and so thankful for Trail Life."

“Even his father is seeing a tremendous difference. Before my son’s attempted suicide, they had become so estranged they were barely able to talk. When he was presented with the Life Saving Award from Trail Life, his dad was able to attend and publicly commend his son. The young man who had been labeled as troublesome, difficult, and delinquent by so many is now being commended, affirmed, accepted, and encouraged by his Troop, his community, and his father.”

“Many sons never hear words of affirmation, acceptance, and encouragement from their father. I want to thank the men of the Troop who have poured themselves into my son and our family. Because of your intervention and effort, a relationship that was broken has been dramatically healed and turned around.”

The mother concluded, “Trail Life is making a real difference in the lives of boys and their fathers.”