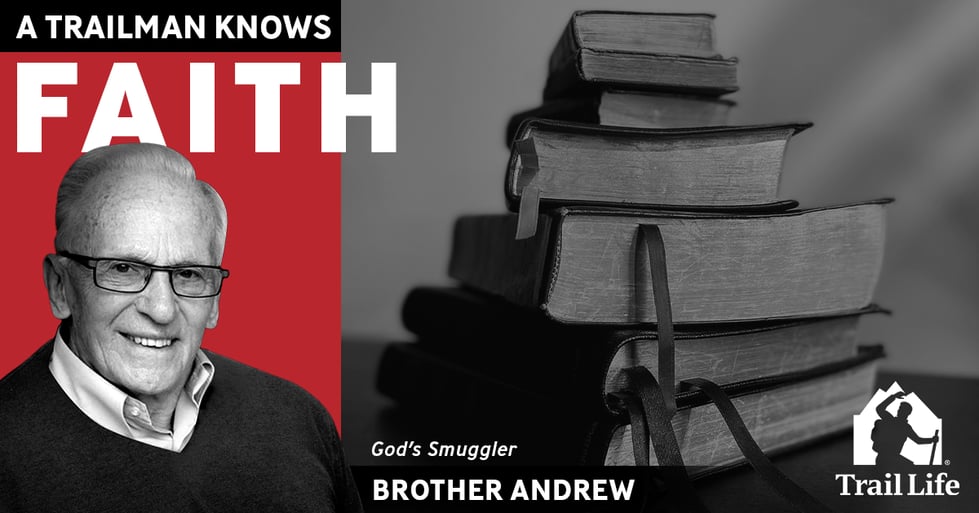 "If your vision doesn't scare you, then both your vision and your God are too small."
-Brother Andrew

As a boy, Brother Andrew dreamed of being an undercover spy who worked behind enemy lines. As a man he found himself working undercover for God. His mission was filled with danger, financed by faith, and marked by the miraculous.

Born in 1928, in the Netherlands, Anne van der Bijl (Brother Andrew) endured German occupation during World War II. After tje war. he worked in refugee camps. There he encountered some of the "hundreds of thousands of terrified and disillusioned people, not only from Hungary but from Yugoslavia and East Germany and every other Communist country." Brother Andrew began teaching Bible classes and witnessed first hand the impact of the gospel as people found hope and learned they are, "beloved children of God." After a class one day an old man said, "If only I had known all of this years ago, back home, back in Yugoslavia."

Determined to deliver Bibles to those trapped behind the iron curtain, a few years, later Brother Andrew found himself on the Yugoslav border. He writes in God's Smuggler, "For the first time in my life I was about to enter a Communist country on my own instead of in a group invited and sponsored by the government...with car and luggage literally bulging with tracts, Bibles, and portions of Bibles. How was I to get them past the border guard? And so, for the first of many times, I said the Prayer of God's Smuggler:

'Lord, in my luggage I have Scripture that I want to take to Your children across the border. When you were on earth, You made blind eyes see. Now, I pray, make seeing eyes blind. Do not let the guards see those things You do not want them to see.'

And so, armed with this prayer, I started the motor and drove up to the barrier. ... One of the guards began poking around in my camping gear. In the corners and folds of my sleeping bag and tent were boxes of tracts. 'Lord make those seeing eyes blind.'

'Do you have anything to declare?'

He asked me to take out a suitcase. I knew that there were tracts scattered through my clothing.

I dragged the suitcase out. I placed it on the ground and opened the lid. The guard lifted the shirts that lay on top. Beneath them, and now in plain sight, was a pile of tracts in two different Yugoslavian languages...How was God going to handle this situation?

'It seems dry for this time of year,' I said to the other guard, without looking at the fellow who was inspecting the suitcase. . . .I told him about my own homeland and how it was always wet on the polders. Finally, when I could stand the suspense no longer, I looked behind me. The first guard wasn't even glancing at the suitcase.

'Well, then, do you have anything else to declare?'

'Only small things,' I said. The tracts were small after all.

'We won't bother with them,' said the guard. He nodded to me that I could close the suitcase.'

For thirty-five years, Brother Andrew’s life story has inspired millions to step out on their own journeys of faith. This young Dutch factory worker’s near-incredible adventures testify of God’s step-by-step guidance and hour-by-hour provision–available to all who follow His call.

"After the fall of the Iron Curtain, Brother Andrew turned his attention to the Islamic World, believing the rapid spread of radical, militant expressions of Islam posed the greatest challenge yet to religious freedom worldwide. Since then, Brother Andrew and the ministry he founded have committed themselves to serving the needs of persecuted Christians throughout the world. His travels logged an estimated one million miles through 125 countries."

The journey that began in Poland eventually took Brother Andrew into private meetings with Yasser Arafat and with leaders of Hamas, Islamic Jihad, the Taliban and Hezbollah, during which he could illustrate God’s love for the people of the Middle East.

The Founder of Open Doors, Brother Andrew, crossed the border into heaven on September 7, of 2022 at the age of 94. His story still inspires millions and his biography, God's Smuggler, has sold more than 10 million copies.