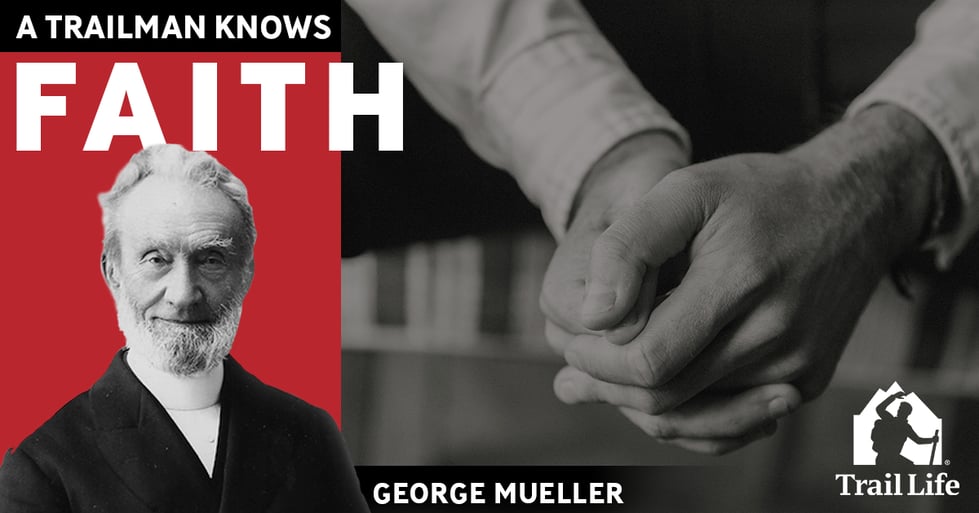 "Faith does not operate in the realm of the possible. There is no glory for God in that which is humanly possible. Faith begins where man's power ends."

George Mueller's life was defined by faith and prayer.

In his autobiography he wrote, "I have joyfully dedicated my whole life to the object of exemplifying how much may be accomplished by prayer and faith."  He continued, “We should not shrink from opportunities where our faith may be tried. The more I am in a position to be tried in faith, the more I will have the opportunity of seeing God’s help and deliverance. Every fresh instance in which He helps and delivers me will increase my faith. The believer should not shrink from situations, positions, or circumstances in which his faith may be tried, but he should cheerfully embrace them as opportunities to see the hand of God stretched out in help and deliverance. Thus his faith will be strengthened.”

Seeing the needs around him and desiring "to display with open proofs that God could be trusted with the practical affairs of life,"  Mueller established an Orphan-House. "This, then, was the primary reason...that the orphans under my care are provided, with all they need, only by prayer and faith, without any one being asked by me or my fellow-laborers, whereby it may be seen, that God is FAITHFUL STILL, and HEARS PRAYER STILL."

He wrote, "Now, if I, a poor man, simply by prayer and faith, obtained...the means for establishing and carrying on an Orphan-House: there would be something which, with the Lord's blessing, might be instrumental in strengthening the faith of the children of God besides being a testimony to the consciences of the unconverted."

And God proved faithful over and over again. On one occasion at meal time, George knew the kitchen cupboards were empty at that moment, yet he had the children come in to sit down to eat, as usual, believing God, who owns “the cattle upon a thousand hills” (Ps. 50:10) would provide, just as He had countless times before. George, at the empty table, prayed and thanked God for the food He would send their way. Not long after George finished praying, a baker arrived with bread. He told George that during the night, he could not sleep. He felt impressed by the Lord to prepare bread for everyone at the orphanage. Realizing that God wanted to use him to feed a good many hungry children for His glory, the baker had worked during the night to prepare fresh bread.

But that wasn’t all. Another man came to the door shortly thereafter — a milkman. His cart wasn’t functioning properly and needed repairs, and the problem arose for him right in front of the orphanage. Could the children and their caretakers use some milk? Yes, of course they could! The milkman unloaded all of his milk and gave it to the orphanage so he would be able to repair his broken cart.

During his life, God provided millions of dollars (in today's currency) for the Orphans and Mueller never asked anyone directly for money. He never took a salary in the last 68 years of his ministry. He trusted God to put on people's hearts to send him what he needed. During his lifetime, he never took a loan or incurred debt. And neither he nor the orphans were ever hungry.

When he died, George Müller owned very little earthly goods himself, but he had stored “treasures in heaven, where neither moth nor rust doth corrupt, and where thieves do not break through nor steal” (Matt. 6:19-20). The Daily Telegraph, a British paper, stated that George Müller “had robbed the cruel streets of the thousands of victims, the the gaels (jails) of thousands of felons, and the workhouses of thousands of helpless waifs."

Providence and Human Dignity are two of Trail Life USA’s 6 Essential Concepts of a Christian Worldview. In the midst of a cultural rising tide insisting that truth is relative, not all life is equally valuable, and that absolutes don't exist, Trailmen are the remnant that is rising.

Learn more about George Mueller at https://www.christianitytoday.com/history/issues/issue-14/from-archives-life-of-trust.html or read The Autobiography of George Muller.

B. Nathaniel Sullivan is a writer and a blogger. He provides insights and commentary from a biblical perspective at https://www.wordfoundations.com, and offers Bible studies at https://www.discoverbedrocktruth.org.