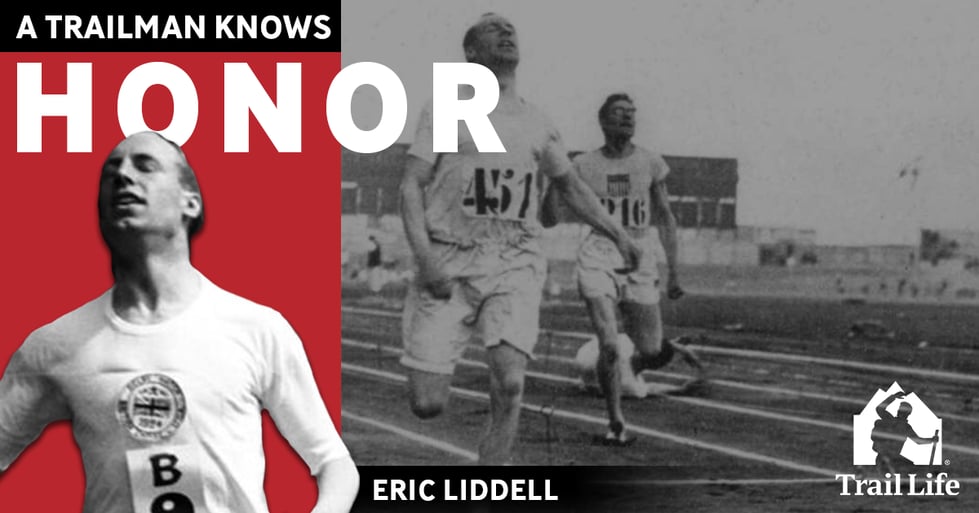 Throwing back his head, pumping his arms, and powering forward, Eric Liddell strained with everything he had. There was no one in front of him as he made the final turn toward the finish line at the 1924 Olympic games. He had given his all and the gold was in sight. He dared not look back to see how closely the world record holder followed on his heels.

Born to missionary parents on January 16th, 1902 in Northeast China. At the age of six, Eric and his older brother Rob were left at a Christian Boarding School for the children of missionaries in England as their parents and sister, Jenny, returned to China. During his time at Eltham Boarding School, Eric discovered God has blessed him with unique athletic ability, and he began to standout among his peers as he led his rugby team to several championship titles.

Graduating as the top athlete in his class, Eric joined his brother, Rob, at Edinburgh University to work on a Pure Science Degree. In both prep school and at University, Eric had excelled in Rugby due to his exceptional speed. While at Edinburgh, Eric began competing in Track and Field events where he ran the 100 and 220-yard sprints. Soon he was gaining attention as the “fastest runner in Scotland,” and newspapers began carrying stories of his amazing feats. After setting a record in 1923 for the 100-yard sprint, he became known as “The Flying Scotsman,” and was touted as the favorite to win gold in the 100-yard dash at the 1924 Paris Games.

With that goal in mind, Eric paused his academic studies and began full-time training for the 100-yard Olympic race. In 1924, Eric won a spot on the British Olympic Team and made the trip to Paris. It was then that he shocked the world. Upon arrival, he was told that the qualifying 100-meter races would be held on a Sunday. As a Christian, Eric held the conviction that he should not run on Sunday. No matter the cost, Eric would honor his convictions. Deciding to honor God even if it meant disappointing his country and forfeiting the gold medal he spent so long pursuing, Eric put aside his best events (the 100 and the 4 x 100 relay) and began to train for the 200 and 400-meter events.

At the Games, Eric finished third in the 200-meter race. In the 400-meter race, he was assigned the worst position and would be in the outside lane as he raced against a field of runners that comprised two world record holders. Before the race, the team trainer placed a note in his pocket with a verse from 1 Samuel 2:30 that read, “He who honors Him, He (God) will honor.” As the gun fired, Eric launched out of the blocks focusing his eyes on the goal and not daring to look back. He pace was so fast that two other runners fell trying to keep up. As Eric rounded the track, he expected to see the other runners crowding in ahead of him, but he was there alone. Pumping his arms and throwing his head back, Eric raced in his unconventional signature style. Straining with everything he had down the final stretch, Eric threw his shoulders forward and crossed the finish line defeating both world-record holders and setting a new 47.6 second Olympic and world record.

Instead of staying in England and enjoying the accolades, after the Olympics and graduation, Eric decided to return to China as a missionary where he taught at an Anglo-Chinese College and used his athletic experience to train boys in a number of sports. While there, he continued to participate in sports and competed in races defeating the French and Japanese Olympic teams in 1928, and winning the North China championship in 1930.

In 1934, while in China, Eric married Florence Mackenzie, the daugther of Canadian missionaries and the couple had three daughters: Patricia, Heather, and Maureen. By 1941, life was becoming increasingly dangerous in China during Japanese occupation. As a result, Eric sent his pregnant wife with their two daughters to live with her parents in Canada while he and his brother Rob – who was a doctor - stayed to minister to the Chinese people.

Eventually the invading Japanese forces reached Xiaozhang where Rob and Eric were serving. Eric was interned at the Weihsien Internment Camp in 1943. There he found himself in terrible conditions without running water or working bathrooms, and received only a small bowl of soup with a morsel of bread for meals. Determined to honor God even in difficulty, Eric became a leader in the camp, caring for the elderly, teaching Bible classes, arranging sports games, and teaching science to children who referred to him as Uncle Eric.

However, after being in the camp for only two years, the man who helped so many suffered a stroke and became unable to walk or help himself. After writing a letter to his wife from the bed in the infirmary, he said to his friend and colleague “It’s full surrender.” He slipped into a coma and died on February 21, 1945, just five months before liberation. Eric Liddell never again saw his wife or met his youngest daughter. He was buried in the garden behind the Japanese officers’ quarters, his grave marked by a small wooden cross.

After the war it was revealed that he had turned down an opportunity to leave the camp, preffering instead to give his place to a pregnant woman.

His death had a profound impact on the camp. One of the children Eric cared for was Margaret Holder. Margaret was born to missionary parent with the Inland China Mission. Separated from her parents, she was at the Weihsien Internement Camp for six-years. She shared stories of how he tutored her, cared for her, and was loved by all the children in the camp. She writes,

In the camp, the children played basketball, rounders, and hockey, and Eric Liddell was their referee. Not surprisingly, he refused to referee on Sundays. But in his absence, the children fought. Liddell struggled over this. He believed he shouldn’t stop the children from playing because they needed the diversion.

Finally, Liddell decided to referee on Sundays. The athlete world famous for sacrificing success for principle was no legalist. When it came to his own honor, Liddell would surrender it all rather than run on Sunday. But when it came to the good of children in a prison camp, he would (honor them by) refereeing on Sunday.

Through the ministry of Trail Life USA, men are stepping up to mentor a generation of Biblically-bold, courageous young men identified by their character, conviction, honor, and faith who will not only stand against this rising tide of culture, but turn the tide itself.

Learn more about Eric Liddell at https://ericliddell.org/about-eric-liddell/, and https://www.epm.org/blog/2018/Feb/12/olympian-eric-liddell and watch the famous movie Chariots of Fire on your favorite streaming platform.