It was Noah Starr’s last Sunday morning leading worship for his Troop.  Soon Troop OK-100 from Yukon, Oklahoma would break camp and Noah’s last trip before heading off to college would be complete. A wave of emotion washed over him as he reflected on his time with his Trail Life Troop, took in the faces of Trailmen worshiping together, and pondered new opportunities at Trevecca Nazarene University where he planned to study worship arts.

Today, Noah recalls the final days in his Troop fondly and misses singing around the campfire with the group of men and boys who he says taught him the, “skills necessary for all boys to grow to become men.”  Now in the second semester of his freshman year, Noah says being trusted with opportunities to learn to lead effectively in Trail Life gave him the skills and confidence necessary to lead an organization of student teams who represent the National Praise and Worship Institute to the student body and lead worship in area churches.

Reflecting on his experience in Trail Life USA he says, “Don’t leave the program without finishing.” On August 30th of 2016, Noah received his Freedom Award and placed it at the top of his standard. In Trail Life USA, the standard is a walking stick most boys receive in their sixth grade year. A Trailman spends the next years developing their standard as they earn Trail Badges that reflect the development of skills and characteristics necessary for godly manhood. The culmination of the program is when the boy symbolically earns his freedom and begins to take on the responsibilities and challenges of manhood. 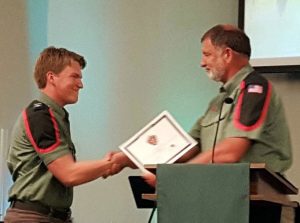 “ The Freedom Award Servant Leadership Project changed my life,” Noah recalls. He began his project three months before his 18 th birthday and says, “managing the project and dealing with deadlines taught me to be disciplined and to set goals.” The task involved leading a team to plan and execute the raising of $1,500 to enclose the front side porch of a home built in the 1930’s to create an office for the local food pantry. Together, the team he led built a foundation, created walls, ran electricity, built the floor, and finished the interior. Noah says, “the project taught me a great deal about organization, budgeting, leadership, and partnership…but most significantly, the project humbled me to serve people without receiving benefit. I learned to be Christ to other people. That changed my life.”