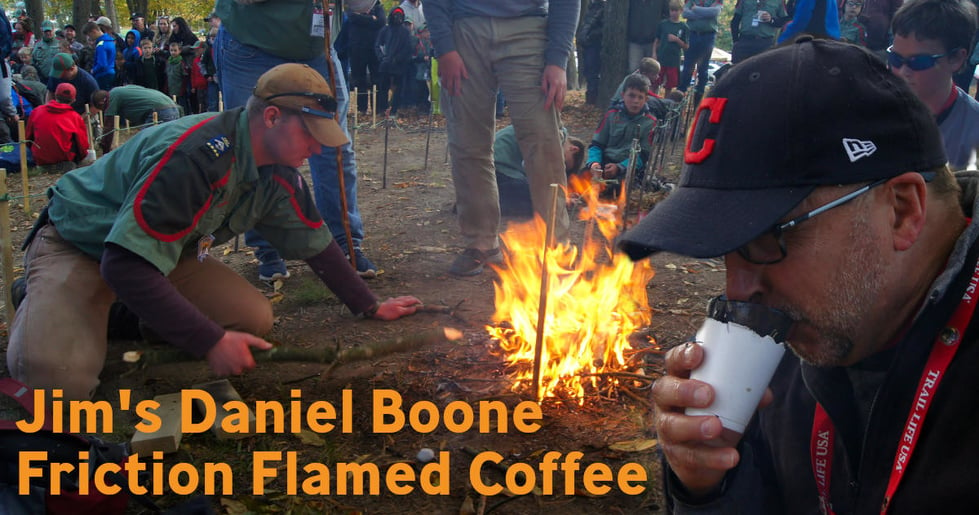 The boys came prepared in teams of four for a highlight challenge of the Daniel Boone Base Camp Event. Each year Trailmen compete to build a fire tall enough to burn a marker string, boil water, and steep coffee for their Troopmaster to drink.  This year, however the planning team added  a twist.  The fire had to be started by friction.

Boys had done research, practiced their skills, and were prepared for the challenge. Some boys brought bow and drill, some had a fire plough, others brought a pump fire drill, and still others had prepped cotton balls laden with ashes to roll between boards. Boys could bring tinder, but the kindling and fuel would have to be gathered by the Troop after the competition began. 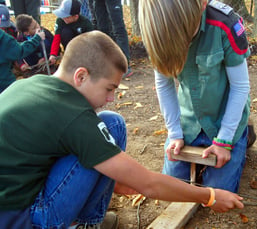 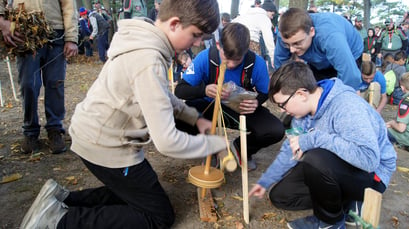 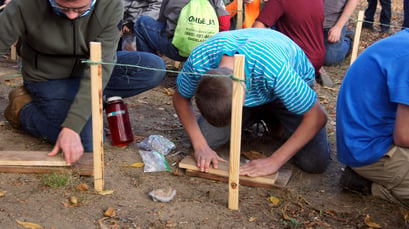 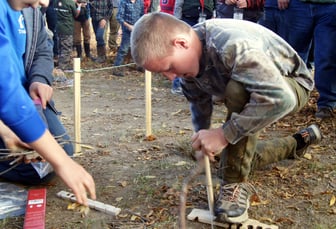 As the boys gathered in their spaces, the excitement was palpable.  With a bullhorn cadence of "On your mark, get set, GO!" twelve teams of boys from eight states leapt into action. The sounds of excitement reverberated through the campground as wood began whirring, cotton began rolling, and Troops cheered on their representatives. Quickly, five teams created a coal to nurse into flame. 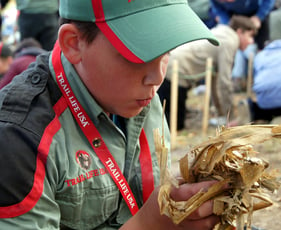 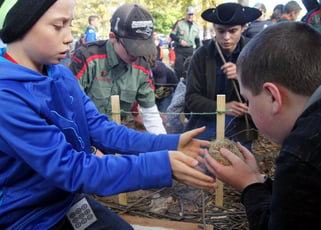 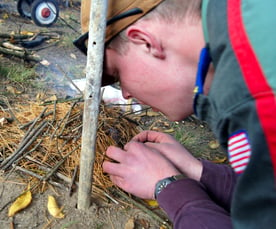 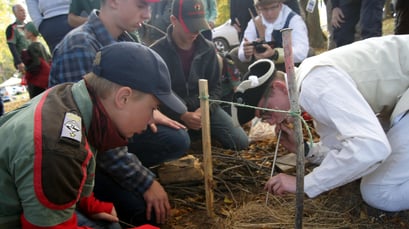 With a live coal, the race was on to breathe the coal into flame, add the tinder, kindling, and necessary elements to burn through the rope high above the tiny ember. Troop members raced to provide the wood necessary to feed the fire as the four members of each fire building team worked to nurse the infant flame and receive the resources from Troop members waiting on the sidelines. Gradually the flame grew to fire, and strings throughout the competition began to burn through, signaling the next stage of the competition. 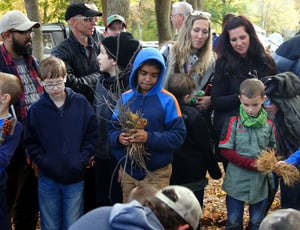 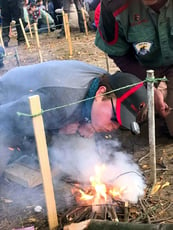 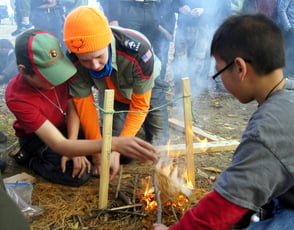 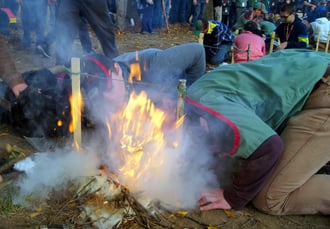 It was time to boil the water for coffee. Carefully, boys placed the cups of water in the fire and added fuel to boil the water. An unfortunate side effect of a boiling race is that the water becomes a little bit less than desirable to drink - all a part of the price leaders pay to help their Troop win the title at the Annual Jim's Coffee Competition. 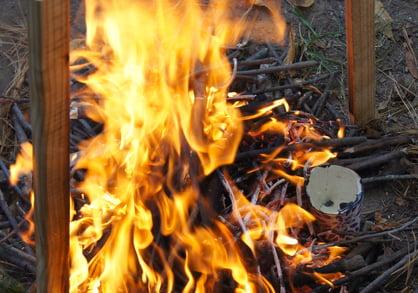 As the water boils, one Troop pulls ahead getting their cup out of the fire first. It seems their gamble with using cotton and ash rolled between two boards has paid off.  However, one significant challenge still exists: the boys must remove the cup from the fire without using any utensils.  It is a risky move, because spilling the water will set the lead Troop behind as they have to start boiling their water all over again.  Carefully, two sticks are used as tongs to remove the cup and place it carefully on the ground where the coffee bag can be added to steep the winning brew. 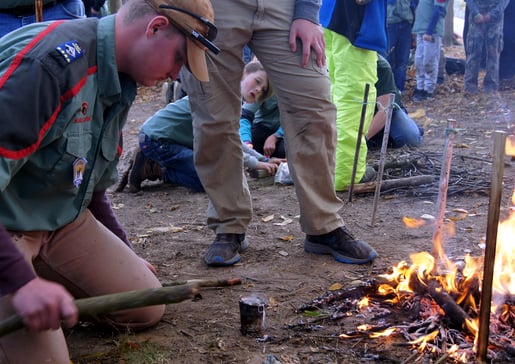 The excitement reaches a feveric pitch as the bag is successfully added to the cup.  Other Troops work frantically to prepare their coffee because the competition is not over until the Troopmaster drinks. Is the concoction they have created even drinkable? 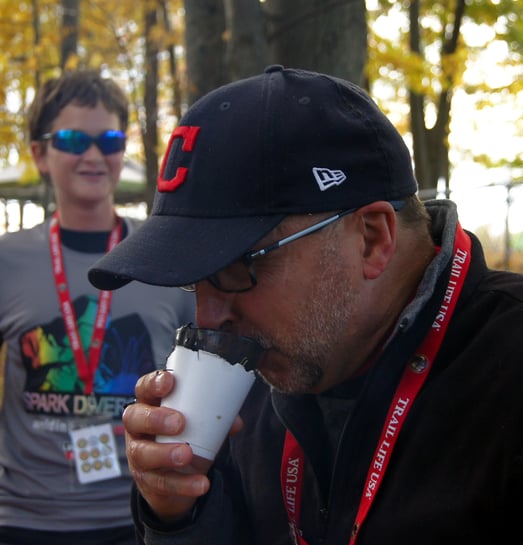 The Troop graciously places the blackened plastic mass into a styrofoam cup as they hand over the fruits of their labor to Troopmaster Steve Putrich. Steve attempts as quickly as possible to swallow the boiling hot, gritty, dirty blackened liquid that has in Trail Life has lovingly come to be known as "Jim's Coffee." Earning the title of Troopmaster today, Steve manages to swallow the entire mixture to secure the Jim's Coffee Championship for Troop OH-0360 this year.

After the win, the winning team separated and worked with other Troops to help perfect their skills, burn through the rope, and create their own coffee. That type of partnership and camaraderie among the Troops has been characteristic of the entire event and is as important as the win. In Trail Life, boys love competition, and winning is satisfying  - but so is teaching, mentoring, and growing the next generation. Trail Life grows as men help men develop skills, who help boys develop skills, who help younger boys develop skills.

Become part of the Adventure!  Find a Troop near you or Start one Today! 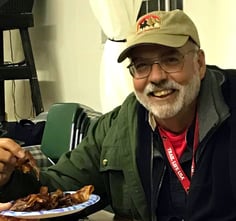 Jim Ramey is one of the many legendary Trail Life volunteers who make Daniel Boone Base Camp a reality each year. Jim is known around Trail Life for his penchant for bacon cooked in cast iron (the unofficial camp currency) and his annual camp coffee event that has come to be known as "Jim's Coffee."