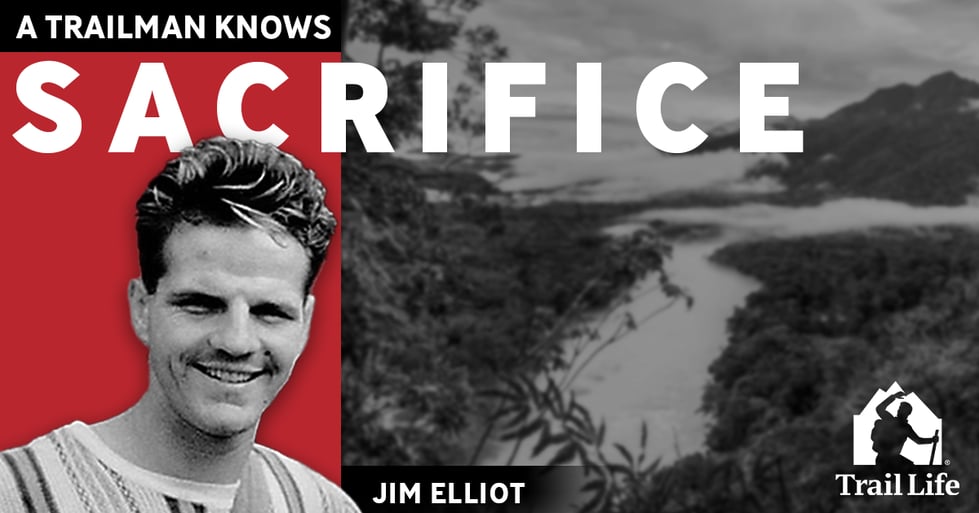 "Greater love has no man than this, that he lay down his life for his friends."

"Forgive me for being so ordinary while claiming to know so extraordinary a God," chronicled Jim Elliot in his journal. "We are so utterly ordinary, so commonplace, while we profess to know a Power the Twentieth Century does not reckon with. But we are “harmless,” and therefore unharmed. . . . We are “sideliners” — coaching and criticizing the real wrestlers while content to sit by and leave the enemies of God unchallenged. The world cannot hate us, we are too much like its own. Oh that God would make us dangerous!"

Determined to live out a "dangerous faith," Jim made several trips to Mexico during his college years. While on those trips, he learned about several unreached people groups and became prayerfully determined to develop a plan to reach them. Ultimately this passion led to an intentional mission to the Huaorani tribe of Ecuador. Referred to locally as the "Acus," or savages, this tribe was know for killing all who came in contact with them.

Driven by a passtion to share the gift of peace and the love of Christ, Jim worked with his friends Nate Saint, Pete Fleming, Ed McCully, and Roger Youderian and their wives to develop a plan to reach this tribe. Flying over the region in late September 1955, Nate and Ed found a clearing where they could manuver the plane to lower gifts in a basket to the people and make contact. One week after discovering the village, the men dropped an aluminum kettle into the apparently deserted village. On the second attempt, they dropped a machete to several excited waiting Huaorani people. On the third flight, they dropped another machete to a considerably larger crowd. On their fourth attempt, they utilized a loudspeaker system to speak friendly messages in the Huarani languate. As further attempts were made, the Huaorani people began to respond with gifts of their own that they would tie to the line that was dropped from the plane.

After three months of air-to-ground contact, the missionaries decided that it was time for personal contact. They located a beach that would serve as a landing strip about four miles from the village, and decided initiate contact. On Tuesday, January 3rd, 1956, the missionaries flew in one-at-a-time and made a treehouse camp. Once settled, Nate and Ed flew over the village to invite the Huaorani to visit them.

On Friday morning, the first vistors appeared. A man, a woman, and a teenaged girl. They shared a meal together with the missionaries and Nate took them up in the plane. The men celebrated their connection on the beach and prayed God would give them the means to reach these people and share the hope of Christ. Elliot famously wrote, "Wherever you are, be all there! Live to the hilt every situation you believe to be the will of God.”

For the next two days, the men waited for the tribe to return. On Saturday, no one showed and the men decided to fly the plane over the village to deliver presents once more. At first the Huaorani seemed frightened by their presence, but celebrated when presents were dropped. Nate and Ed returned with the plane and waited on the beach with the other three missionaries.

Then, on Sunday afternoon, two Huarani women walked out of the jungle. Jim and Pete excitedly jumped into the river and waded over to meet them. However, as they grew closer, the women did not appear friendly. It was then the pair heard a cry behind them and turned to see a party of warriors with spears raised.

Though carrying guns for protection in the jungle, the missionaries chose not to fire at their assialants. Each of the missionaries had promised they would not kill any of the Huaorani who did not know Jesus to save himself from being killed. Within seconds, the warriors threw their spears, killing the band missionaries: Ed McCully, Roger Youderian, Nate Saint, Pete Fleming and Jim Elliot. By mid-afternoon, Sunday, January 8, it was all over. Nate Saint’s watch stopped at 3:12 p.m.

Before his death, Jim Elliot had written in his journal, “He is no fool who gives what he cannot keep to gain what he cannot lose,” and “When it comes time to die, make sure that all you have to do is die.” Jim and his friends had lived well and their sacrifice would ignite a spark that would changes the lives of tens of thousands around the world.

As word spread about the sacrifice and dedication of these men, more than 25 pilots applied to take Nate's place and more than 1,000 college students volunteered for foreign missions. Within three weeks, Johnny Keenan, was continuing the flights over the Auca village.

In less than three years, Rachel Saint (sister of Nate Saint) and Elisabeth Elliot (widow of Jim Elliot) had not only renewed contact, but were able to move to the Hurani village and establish a permanent residence where they practiced basic medicine and began developing a written form of the language. In time, faith came to the Hurani people. Missionaries, including Nate Saint's son and his family, still live among the Huaroani today.

Learn more about Jim Elliot at https://www.christianity.com/church/church-history/timeline/1901-2000/jim-elliot-no-fool-11634862.html and https://www.thegospelcoalition.org/blogs/justin-taylor/they-were-no-fools-60-years-ago-today-the-martyrdom-of-jim-elliot-and-four-other-missionaries/, or read Elizabeth Elliot's account of their story in "Through Gates of Splendor."