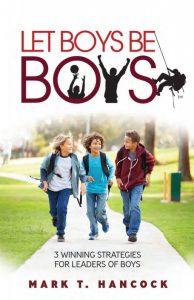 Boys and Girls are different. “As leaders of boys in schools, homeschools, churches, and youth organizations, we must recognize and affirm their unique strengths and challenges. We are positioned to instill the principles and character traits that can prepare boys to become courageous, successful, focused men. But will we?” How can we successfully engage and disciple boys? If your attempts look anything like a typical classroom or Sunday school class, you are fighting a losing battle. Boys aren’t defective, they are different and to engage and disciple them effectively, we must Let Boys be Boys!

Discover three winning strategies from Counselor and Author Mark T. Hancock to engage and guide the next generation of young men to honor God, lead with integrity, and serve others.

Here's the introduction to get you started:

Imagine sending an army to war without the tools or training to achieve victory. That would be ridiculous. And yet we are sending boys, ill equipped, into a culture that has seemingly declared war on boyhood.

The results are tragic: According to the National Center for Educational Statistics, boys are almost twice as likely to receive special education,1 and the National Institute of Mental Health reports that boys are three times more likely to be diagnosed with ADHD. Academically, boys underperform girls at every level. Meanwhile, women earned more than 52 percent of doctoral degrees and more than 57 percent of master’s degrees in 2016.

Diagnoses of ADHD increase steadily. Conduct that used to be considered typical boy behavior—running or climbing when it’s not appropriate, or having a hard time waiting to talk or react—is now bulleted in lists of ADHD symptoms, as if boyhood is some sort of social disease that needs to be eradicated.

In a culture wary of “toxic masculinity” and bombarded with decades of secular media presenting fathers and husbands as buffoons, is it any wonder that psychologically damaging, unscientific gender-identification propositions find an audience? Boys are starved of moral direction and ignored in terms of academic struggles. They have no platform for their own defense because they’ve already been judged deficient.