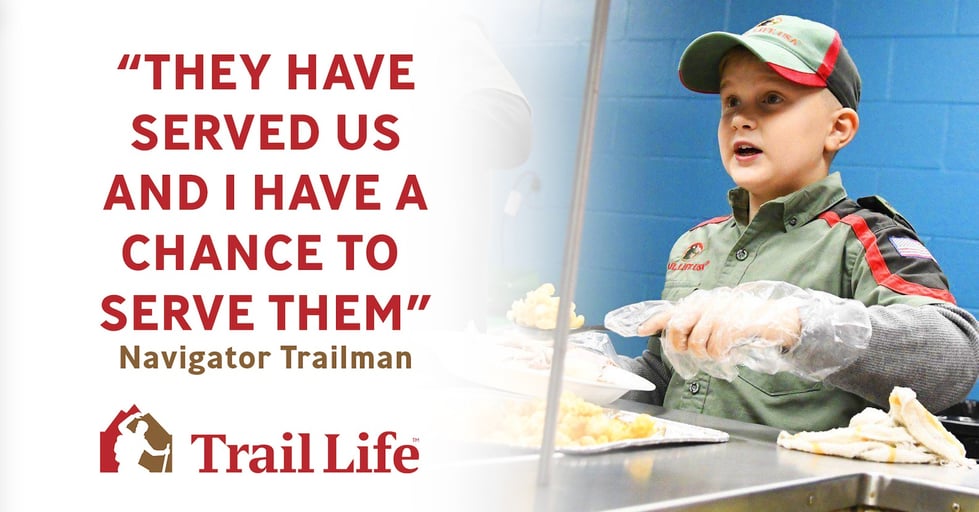 Holding a spoonful of green beans in one hand, 11-year-old Charlie Keeling looked over the counter at the veterans in line before him at Restoration House Family Worship Center.

"Would you like some green beans?" Keeling asked. "Are you a veteran? Thank you for your service."

"I tried to be polite," said Keeling, who lives in Muhlenberg County. "They've served us and I have a chance to serve them."

Trail Life USA is "a church-based, Christ-centered, boy-focused mentoring and discipleship journey ..." according to traillifeusa.com. "Boys from kindergarten through 12th grade are engaged in a troop setting by male mentors where they are challenged to grow in character, understand their purpose, serve their community, and develop practical leadership skills to carry out the mission for which they were created."

The local Troop launched in August and includes boys from Christian, Todd and Muhlenberg counties.

"We are trying to teach the boys to honor and serve their elders, as well as be public servants," said Brenden Couchman, Troopmaster for KY-5812. "We put this together as a good opportunity to teach them a culture of honor."

The Troop color guard opened the evening by marching in with the American and Christian flags and the Bible, followed by pledges to each. Trailman Noah Goebel, 10, played "The Star-Spangled Banner" on the violin.

"To be selfless, to give of your time, to sacrifice and to even put your life in danger's way for the safety of others, that sounds like Jesus," he said. "We just want to say thank you. Can we just honor all of our military families, our veterans and our first responders. We really appreciate you."

In the fellowship hall, Michael Luckingham, 10, a Mountain Lion in the Troop, served mashed potatoes to the evening's guests.

"I'm very grateful that (they) stand for our country and (they) make everything possible," he said.

"We appreciate them doing something like this for us. We don't expect it, but we do appreciate it," Nightingale said. "It was very good. We enjoyed it. That pecan pie was awesome."

Firefighter Bobby Hogge, who works at the main fire station downtown, thanked the troop for the early Thanksgiving.

"We appreciate it. To have a community we have the privilege to serve -- and it really is a privilege -- and to have them behind us, it really means a lot," Hogge said.

After the meal, an Armed Forces Medley of songs paid tribute to each branch of service. All branches of the military were represented, except the Coast Guard.

Then, the young Trailmen entertained the guests with a short concert featuring Goebel, Colton DeJaynes, Zach Harpel and Malachi Harpel. Several Trailmen showcased their acting talents with a few skits on the stage, as well.

Jesse DeJaynes, a Ranger in charge of kindergarten through fifth graders in the Troop, said events like this are what Trail Life is all about.

"(In) Trail Life USA, the boys take on leadership roles depending on how old they are and how long they've been in the program," he said. "We're here to build up their character and help them grow up to be strong leaders and strong men for the community and for the nation."

Troop KY-5812 is still doing open enrollment throughout the year. The Troop meets three Mondays a month and one Saturday when they "hit the trails," DeJaynes said.

Future community service projects for the troop will include helping with Wreaths Across America at 11 a.m. Dec. 14 at Kentucky Veterans Cemetery-West and ringing bells for the Salvation Army next month, Couchman said.

"It's wonderful. My compliments to the chef," he said. "It's a blessing for us. We all go through some stuff. They help us spiritually and physically in our time of trouble. It's wonderful. God bless them and the ministry."

Article Originally Appeared in the Kentucky New Era at https://www.kentuckynewera.com/news/article_da5aeee2-0c43-5dcf-b52c-617cbc587fd9.html