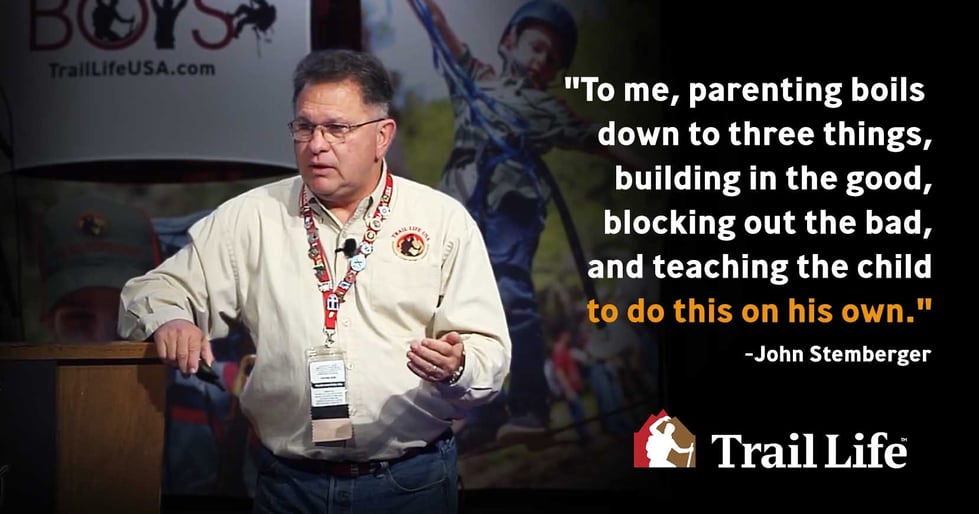 Protecting Boys From the Lies of This World

What follows is a partial transcript of John Stemberger’s keynote address entitled “Protecting Boys From the Lies of This World.” The speech was delivered on Sunday, July 21st at the Trail Life USA Summer Adventure and Family Convention. To hear the message in its entirety, click the video link below.


I want to talk to you this morning about protecting our boys from the lies of this world and why a Christian worldview is very important to the future of Trail Life USA. Clearly we’re living in a post-Christian culture, and today’s world has become a jungle full of lies and bad ideas and deceptions that are invading our children’s hearts and minds and causing them to think in very worldly ways instead of and very godly ways about very important issues of life.

The world is just everywhere we go. It’s frustrating because I wish we could just do outdoor adventure. I wish we could just teach boys character and not have to address all this stuff. But we can’t because it’s raining acid, and we have to protect ourselves and protect our boys in our program. To me parenting is really three things if you simplify it. It’s building in the good stuff. It’s blocking out the bad stuff. And then it’s teaching the child to build in the good stuff and block out the bad stuff on his own gradually as he leaves us.

If we just do the first two and they’re not owning it, then they get into the world and they go crazy. And we’ve seen it time and time again in home school, private school, and public school Christian families. Kids go into the world, they didn’t own it, and they just went crazy. We thought they were with the program, but they really weren’t. So I think that the most important thing that we can build in is a Christian worldview.

And the first thing we would do is set the car up, and we would anchor it in front of something so we know where the car was, like one of these large hotels. And then all of us would go into the surf and try to go out as far as you can go. And so what was interesting though is within literally minutes – 15 minutes, 20 minutes, even 10 minutes – we began to drift.

And we didn’t even know we were drifting. The waters pulled us far away from the anchor at which we started. And I think this is very much an analogy for the world we live in. The waters of the world used to be ankle-deep, and we could kind of control it. It wasn’t consuming us. Now the waters of the world are literally up to here [motions to chest]. And so it’s constantly a challenge because it’s pulling us in its direction, and we have to be intentional and make sure that we don’t get swallowed up by it.

Over and over again we hear these admonitions in Scripture, “Do not be deceived.” And it’s interesting because deception is the only condition in which, if you have it, you don’t know you have it. If I’m deceived about something, I have no idea that I’m being deceived. It’s only if somebody brings me the truth that I suddenly realize I’ve just been lied to. Scripture speaks of three enemies – the world, the flesh, and the devil. One sense of “the world” means the systems of the world. In other words, the lies of the world, the way that the world thinks. And so this is what I’d like to address when we’re talking about worldliness.

We know as a matter of fact that our own Christian young people have very high casualty rates when they grow older, especially when they go to college. It’s a very intentional effort. So we, the Board of Directors, want to integrate Christian worldview into every aspect of the program. The Board views itself as the guardians of the program. We have a volunteer-led structure that does most of the program development, but ultimately the Board has to approve new content. Since day one we’ve been very concerned about how to make sure that the organization is secure and does not drift with the waters that are moving us very, very rapidly in an increasingly hostile, and in some places, flat-out anti-Christian culture.

So to this end, I want to walk you through the six concepts. We spent almost three years on this. This is not something that we did overnight. We talked about it quite a bit. We spent one whole retreat on it, and it was extensive debate. Every single word was scrutinized.

So I want to talk with you about the ways in which we are grinding these carrots up and putting them in the carrot cake. That’s our analogy. We don’t want big chunks of carrot so that they’re choking on it. We want every bite of the program to have little pieces of carrot. In the new Trailman’s Handbook that’s on sale now, all required trail badges have at least the first one or two requirements invoking, “How does a Christian worldview apply to this topic? What does God have to say about this topic?” And when appropriate, we integrated the assumptions of the question into the principles we’re going for: “The world says this, but God says this.”

So the bottom line is we want to be wise, and we want to be long-range in our thinking. We need to seriously analyze what it will be like to live in a post-Christian and increasingly anti-Christian culture. We want to be builders and protectors of our program so that it can stand the test of time. And to be very honest with you, we need you to help us carry this, communicate this, envision others with this, and help us to integrate this into the program.

With all of our children and the young men for whom we’re responsible, you could have the same exact godly parenting, and one child grows in a healthy way and the other does not. It’s just part of the mystery of life as to why some people go astray. All we can do is be faithful. And that’s all we’re asking you to do – to be faithful. We can’t save our kids. Only God can rescue them in their own hearts as they respond to His love and His grace. We’re simply asking you to be faithful and to help us with this. Thank you for your time and God bless you.