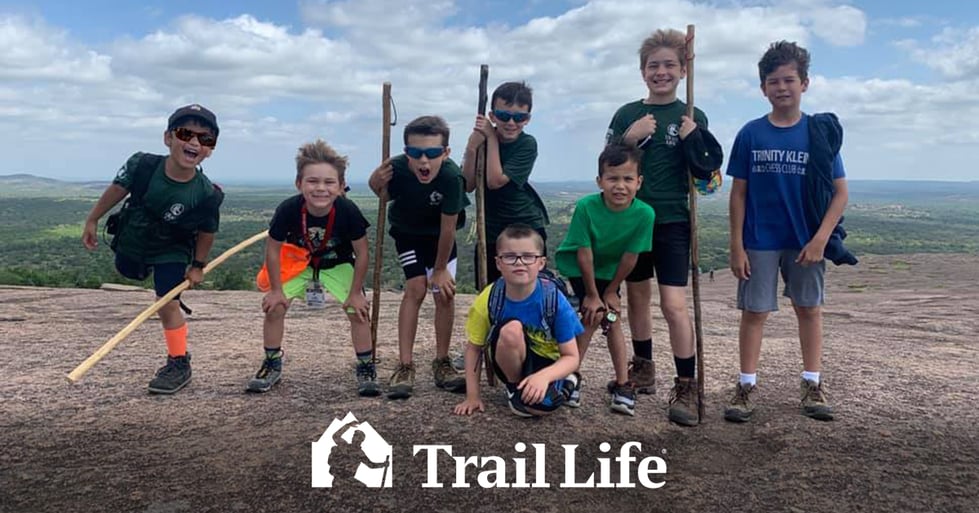 As members of Trail Life Troop TX-1333 arrived at the trailhead to summit Enchanted Rock, the largest pink granite monadnock in the United States, we reviewed our hiking checklist, topped off our camelbacks with an adequate supply of water, added a few electrolyte tabs, applied sunscreen, and packed a few extra snacks. The temperature during our climb to the top of the rock would reach 98 degrees, so we realized proper preparation was paramount. As we put on our wide-brimmed hats to embark, there was no way we could have realized that the water we were storing would save the life of another.

The hike up Enchanted Rock isn’t a particularly dangerous one, but our group still scheduled two breaks for pictures and to take time to rehydrate. Once we reached the summit at 1800 feet, all the boys and dads joined together for a victory photo. Yet for some of us, the adventure was really only just beginning.

The view from every side of Enchanted Rock is stunning, and on a clear day, one can see many miles in all directions. However, looking down the back side of the mountain is especially exhilarating because after about 100 yards down, the grade is much steeper than that on the front, giving it a “cliff feel.” Gazing in this direction at the top of the mountain, the boys could see the awe-inspiring visual contrasts between the tans, reds, and beige rocks against the blue sky, white puffy clouds, and the green tree tops down below. 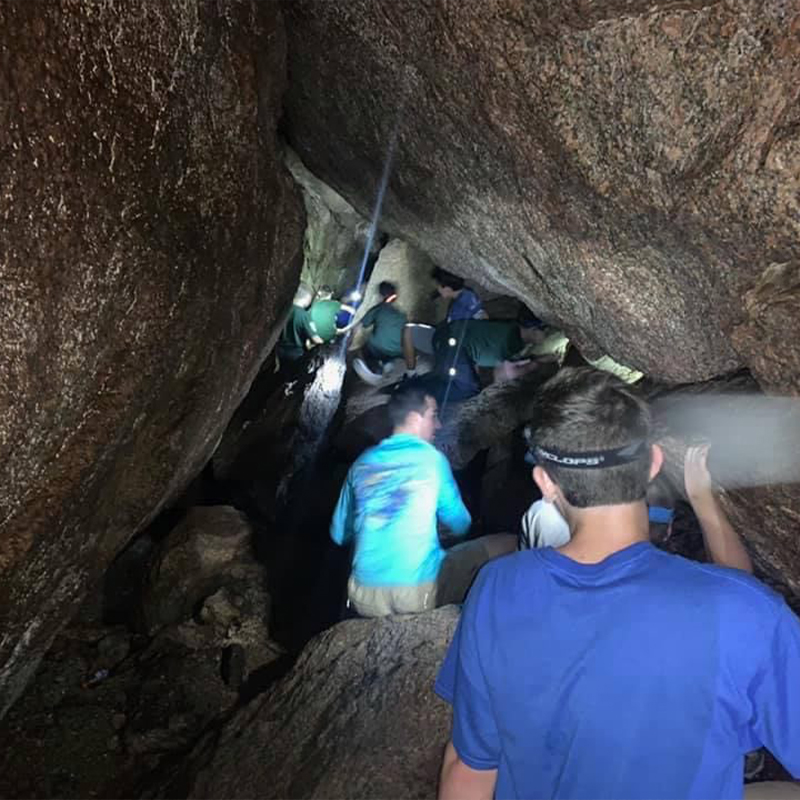 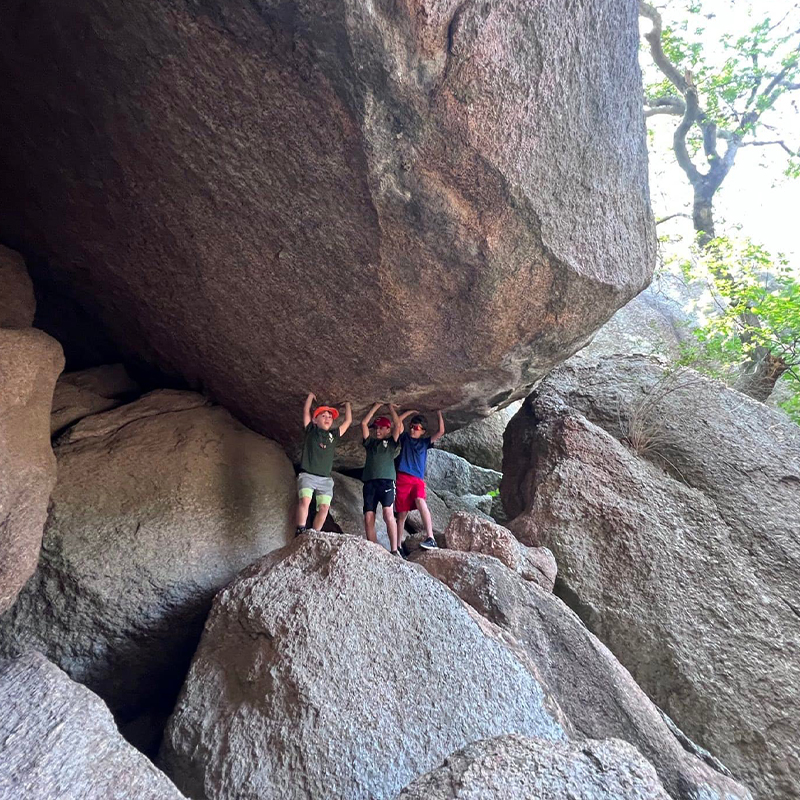 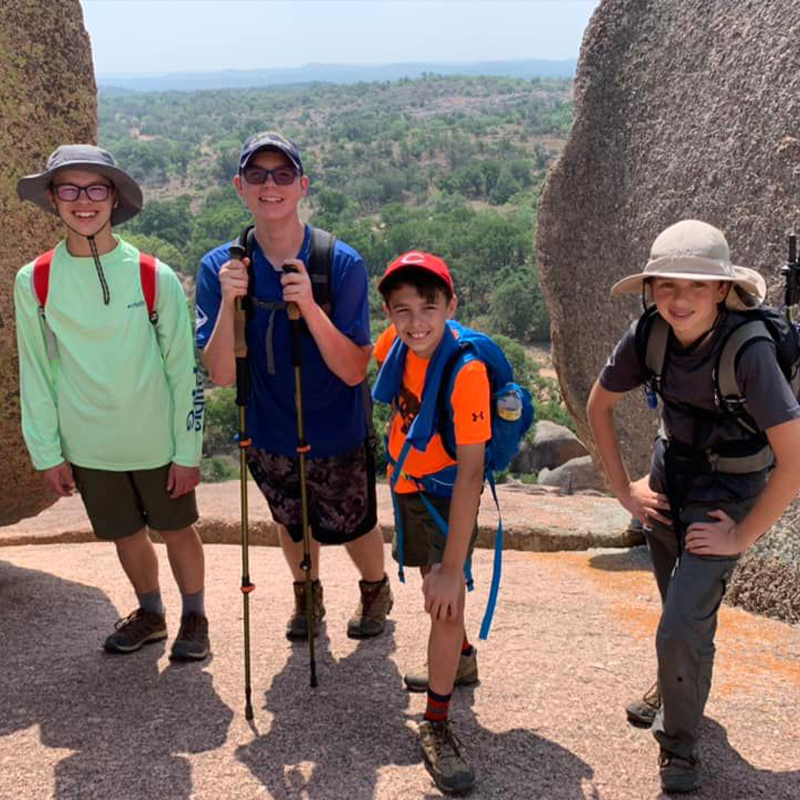 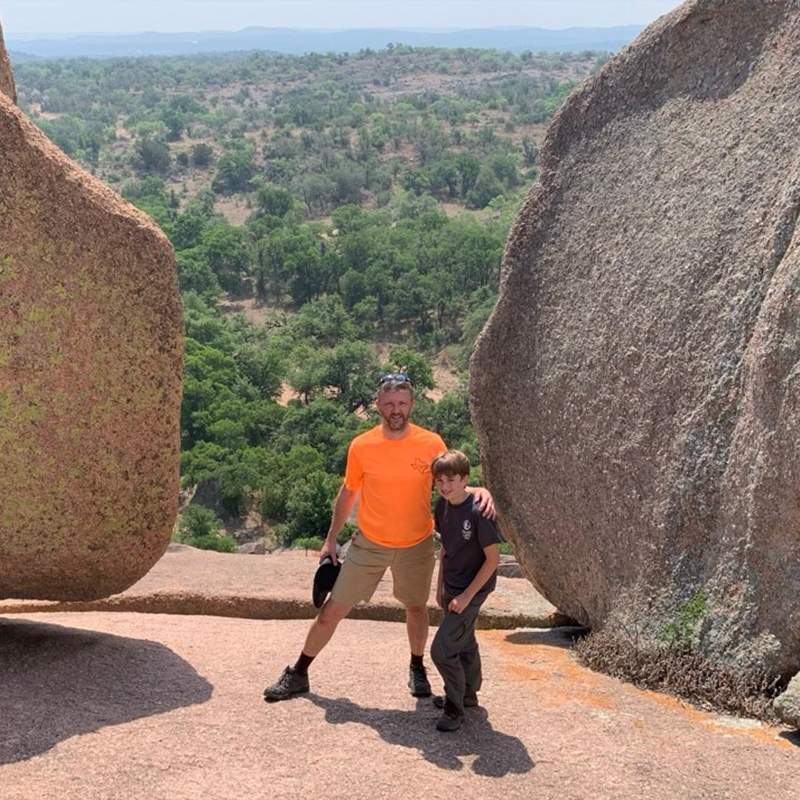 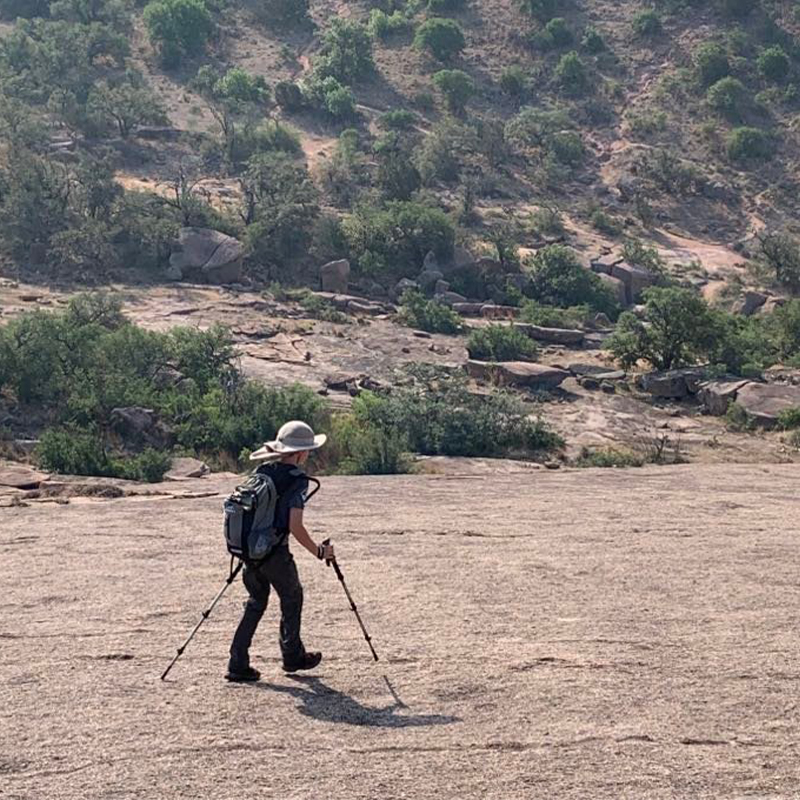 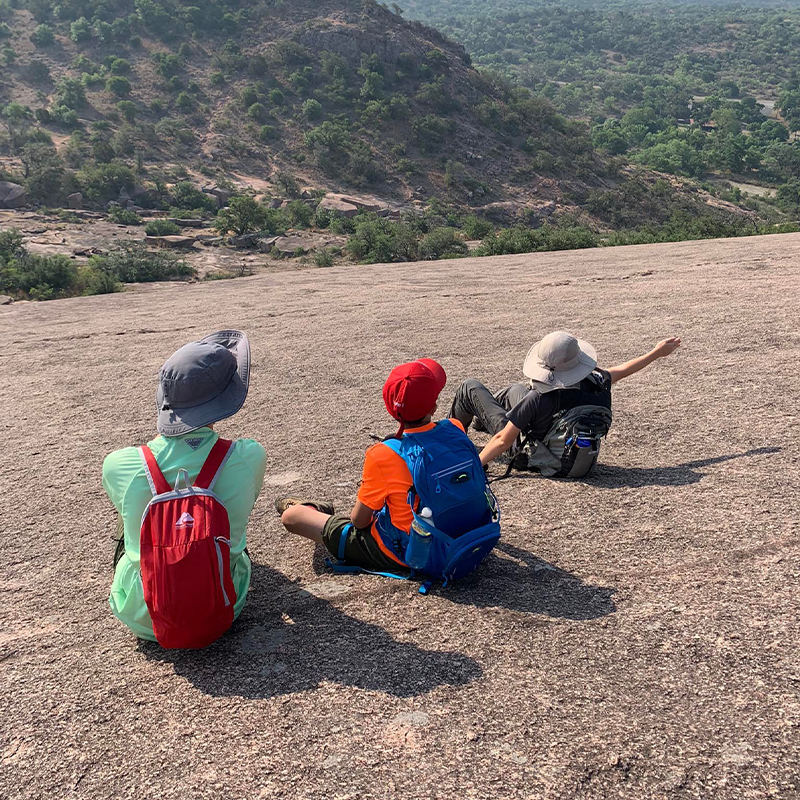 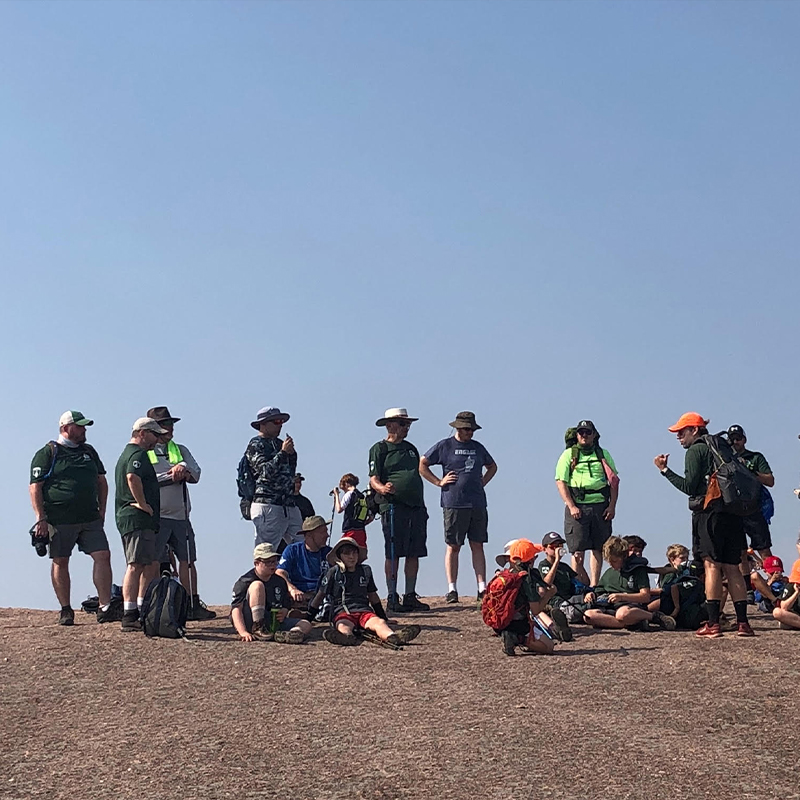 Before our trip, the boys had done their homework; they knew about the network of cave passageways inside the mountain that are accessible from the back side. The cave is made from giant slabs of broken granite that is the makeup of the mountain.

The boys brought flashlights and headlamps and were excited to explore the 30-to-40-minute downward scramble. Most of the cave is just wide enough for a single person to move through, and the passageways include some precarious spots. Ahead of time, the boys had learned

Therefore, upon exiting the cave, the boys and men planned to climb back up and descend on the front side. This is the approach most Enchanted Rock cave explorers take.

Our hiking party had scheduled this “cave adventure” to take place following a short rest on the top of the summit. Having arrived early and navigated the cave the day before, my son Dakota and I decided to wait while our fellow Trailmen entered the cave and made their way through. Shortly after they went in, we began walking down the back side of the mountain to the cave exit to wait for them.

As we set off, we heard a cry from a very distressed elderly woman. “She’s trapped! She can’t move! Please help her!” Her yell startled us. We later would learn the full story: A woman below had traveled down through the cave and had exited, but instead of ascending back to the top, she began to descend the perilously steep portion of the mountain! The elderly woman had been out of touch with her friend for about an hour.

She’s trapped! She can’t move! Please help her!
—an elderly woman calling out for help for a friend, at Enchanted Rock near Fredericksburg, Texas, on Saturday, May 21, 2022—

Desiring to help the elderly woman while keeping the boys from the Troop safe, two dads began scouting the section of rock below the cave. Unable to find the trapped woman at first, they were able to locate her about 40 yards below the Troop. It was then they discovered she had been accompanied by her 11-year-old daughter. The two of them were trapped on some rocks that formed a slightly level ledge that jutted out from the steep decline, approximately 1,000 above the base of the summit.

Exercising caution, the pair of fathers made their way down to Angela and her daughter to assess the situation. Angela was in a precarious condition; it was clear she was experiencing heat exhaustion and the effects of severe dehydration. She was disoriented, had cuts on her legs, and was immobile. Further, Angela was fully exposed to the blazing sun on the ledge on which she’d managed to position herself. She’d been throwing up shortly before we arrived and was unable to speak.

Finding a safe route down, we were able to retrieve additional water and rehydration salts and several Trailmen were able to assist in helping move the mother and daughter a short distance to a slightly shaded, and thus cooler, area.

Together, we began to scout for a possible route to move them away from the small ledge. After a few moments of surveying, we realized that given Angela’s condition, there was no safe way for us to extract her on our own and we called the State Park rangers for assistance. The rangers informed us that a search party already was looking for her but had been given the wrong location. Together, we were able to relay our location by description and by using GPS coordinates. At last, help was on the way!

After about 30 minutes, Park Ranger Chase Harper arrived and climbed down to us. He brought with him first aid, ice packs, and a tarp to provide additional shade for the dehydrated lady. Ranger Harper concluded the lady would not be able to descend the mountain herself; so he began coordinating with other Park Rangers a strategy to get her down. Soon members of the Fredericksburg EMS response team arrived to treat Angela. They gave her an IV and some anti-nausea medication to help her emerge from her dehydrated condition.

Additional necessary steps were taken. As we waited and talked with Angela and her daughter, emergency responders from Willow City Volunteer Fire Department, Fredericksburg Fire & EMS, and the State Park Police worked together to lower a medical basket so she could be lifted her back to the top of the mountain and down the front side. A rope pulley system was created and anchored to two all-terrain vehicles on the summit. A basket was then sent down for the lady. Once we helped her into the basket and got her securely strapped in, we hoisted the basket over the protruding rocks to the smooth vertical surface on the top of the mountain. As the crew slowly pulled her to the top, the assembled Trailmen shouted to Angela that this would all be over soon, that it was the end to a bad day. After being with Angela and assisting her for three hours, we were relieved and grateful to see her make it safely to the top and then down the mountain in the basket without any further complications. Thankfully, because of her rapid improvement, she was able to go home and didn’t have to go to the emergency room at the local hospital.

Having the proper essentials before heading into the backcountry made all the difference that day. I thank God that we were prepared, that we were able to find Angela, and that we had the training necessary to render assistance before she passed out and her situation worsened. This was a great learning experience for the Trailmen on being prepared for the elements, and on how vital our roles can be in helping others and in making a positive difference when we are prepared.

Story Compiled and Edited by writer and blogger B. Nathaniel Sullivan who provides insights and commentary from a biblical perspective at https://www.wordfoundations.com, and offers Bible studies at https://www.discoverbedrocktruth.org.