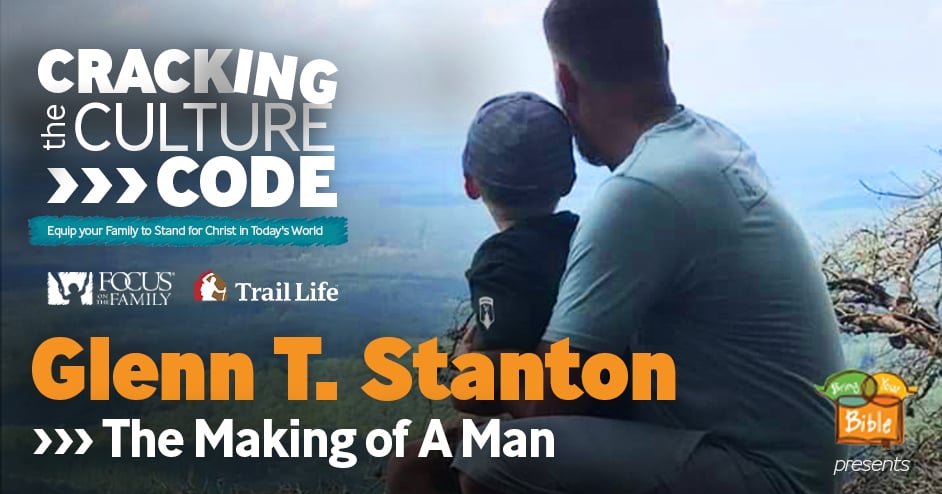 The Making of a Man

Manhood is in crisis today. The increasingly accurate term “perpetual adolescence” is not a reference to girls failing to grow up. We intuitively know it refers to 20- and 30-something men. Men are falling behind women in college enrollment and graduation; they’re increasingly unemployed; and traditionally male-dominated industries are disappearing. They are more likely to be homeless and to use and abuse all almost all types of illicit drugs and alcohol. Ninety-nine percent of all prison inmates are male, as well as 98 percent of death-row inmates. Men are not doing well. In many ways, they are becoming the “weaker sex.”

Much of this has to do with the nature of manhood itself...[The truth is, while] maleness just happens – Manhood does not. And there is a great difference between the two. The first is a biological event. The second is a developed character quality. Manhood must be constructed—and when it doesn’t, it fails to develop. Hence, perpetual male adolescence, often found in the form of a dude living in his parents’ basement…

The boy’s transition into manhood is not similarly predetermined. It must be created with significant intentionality. In other words, manhood is a behavior that must be taught, and an identity that must be bestowed by a boy’s family and the larger community of men—his parents, extended family and surrounding community.

Why is this so?

The male nature doesn’t naturally go in the direction society needs it to go. It is more oriented toward extremes—lethargy and passivity, or aggression and opportunism. Manhood must be crafted.

This brings us to the crux of the issue...

Manhood can only really be taught and developed by older men, instructing and showing what is expected of the boy in order to become a part of the fraternity of good men. Mothers and girlfriends cannot deliver it.

Wives are different: They do play a key role. What they expect and demand of their husbands serve as powerful drivers and have done so in every culture since the beginning. Ask a man who has been married 10 years or more if his wife made him a better man. We all know what his answer will be.

The primary question is how one generation of men accomplishes this in their service to the next generation of women, children and society. And particularly, how we do it in today’s culture with all its unique challenges? This question and its answer must become a national concern sustainability as it affects industry and economics, criminality, health care, education and every other essential part of any community. It is the work of human culture and well-being.

What are the qualities of manhood?

Manhood is not so much about anatomy and age as it is about a particular type of character. If we did not all have a general idea that courageous manhood is a definite and distinct thing, the statement, “He is not a man,” would have little meaning. But it has immediate meaning, and we take it as a strong rebuke upon the person.

So, what are the character qualities that mark healthy manhood?

…As we seek to bring young men into healthy and authentic manhood, we must ask, “What are we shooting for, and what does this look like when done successfully?”

This question can be more complex than many assume. One can be a “good man” and quite different in temperament, talents and interests than other men. Teddy Roosevelt was a different kind of “good man” than Abraham Lincoln. Mr. Rogers was no Chuck Norris. Yo-Yo Ma is not Franklin Graham. Each was, or is, a good man, though. But these differences do not mean we cannot speak meaningfully and truthfully about what manhood is, and is not. Good men do have basic common qualities.

While certainly not exhaustive or comprehensive, this list is a compilation of many of the most important, widely practiced and culturally expected qualities of manhood according to anthropologists, psychologists and sociologists who have studied the nature of manhood across diverse cultures and time.

Courageous: A man does not shrink from a necessary challenge, regardless of risk. He will face danger, difficulty and self-denial when called upon for the sake of others.

Steps Up: A man is the first one out of his seat (figuratively and literally) when a need arises. He’s a problem solver and takes initiative. Passivity is never manly.

Provides and Protects: A man has learned how and is willing to provide and care for a particular woman and their common children. He doesn’t skip out on this duty. Even if he never marries, he’s the kind of person who could do this and, in fact, provides for others in various ways. As anthropologist David Gilmore concludes, “A man produces more than he consumes,” and the community benefits from his work and generosity.

Self-Reliance: A man can stand on his own without depending on others for his well-being. The Boy Scout motto is “Be Prepared,” because the man doesn’t want to have to depend on the preparedness of others. He is not a loner, though. He is willing to work with others.

Honesty and Moral Strength: A man does what is right and calls out others who do not. He deals with others in integrity. Temptation presents itself to every man, but the decisions and actions he takes in light of it significantly determine his manhood. He can be trusted to do what is right when no one is watching. He keeps his word and is dependable.

Tenacity: A man does not easily give up or shrink away in the face of challenge or adversity. He sticks with it and wants to overcome obstacles. “It can’t be done” is not a conclusion he reaches with ease.

Self-Control: A man is aware of his proper limits for himself—his strength, appetites, independence, language and power—and respects them. He calls others to do the same.

Under Authority: A man recognizes he is under the authority of another—be it a boss, his own father, his pastor or God—and acts accordingly. He is willing to respectfully challenge those in authority when conscience demands, but he is never simply a renegade.

Shows Respect: A good man shows respect to himself and those he meets, regardless of their station. He looks them in the eye. Gives another man a firm handshake. Offers words of respect such as “Yes sir/ma’am” or “Thank you, sir.” A man helps others feel valuable.

Loyalty: A man is loyal to his family, friends and others who are close to him, even at great price to himself.

Humility: A man esteems others as valuable and lifts them up. He does not praise himself. He understands the importance of and strength in apologizing and asking forgiveness when he has offended or let others down.

Compassion: This might seem a feminine quality, but a man sees the struggles of the weak and those in trouble and readily comes to their aid. This is a moral strength. A man doesn’t exploit an innocent person’s weakness.

Lives His Character: Lastly, if manhood is a distinct set of character traits, the final quality is that he lives them out in action, and he does so conspicuously in the community.

To be sure, women do many of these things. However, they tend to do them differently than men, and often for different reasons in different situations. This is easily and intuitively recognized by most people. For instance, women certainly provide for and protect their families. But the world over, we intuitively recognize the ways men and women tend to do it differently. There is no culture where we would be confused as we observe men and women doing these things for the family.

Finally, no man possesses all of these qualities in full measure. But we expect a man to strive for them and will not be pleased with him if too many of them are woefully absent. We say things like, “He is not a good man” or “He needs to man up!”

Christianity is unique because in it, we see that God became man: fully God, fully man. And it is not just happenstance that He became a man, rather than a woman. It was God’s perfect will.

Jesus became the ideal of manhood, exhibiting all the qualities of a good man. He was strong, took responsibility for His actions, served and provided for others. He looked after and cared for the weak. He spoke truth faithfully and gracefully. He demonstrated integrity in all He did. He was a man under authority. He stood up to and called out the powerful when necessary. He was the highest example of humility, moral strength, self-control and compassion. He always did the right thing. Finally, He gave Himself completely and fully for others. He withstood and overcame the greatest evil in the universe. He was victorious, and He invites each of us to become the beneficiaries of all that He has done for us! That is manhood.

Anyone who wants to learn what a good man is needs only study and imitate the life of Jesus. It is right there for us in the Gospel.

Read the Full Story on the Focus on the Family Website:

The Essence of Masculine Strength

A Journey to Freedom