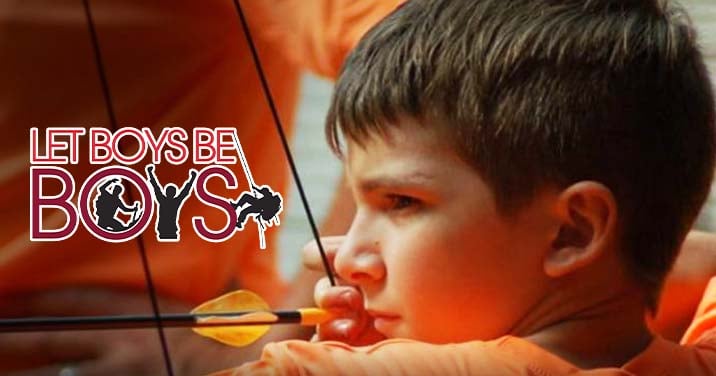 Trail Life USA: Raising Boys to be Men in an Age of Uncertainty

Boys and girls cannot be expected to perform the same because they are different in many ways. A “one size fits all” approach to educating kids doesn’t work. “We need take into account that … boys and girls are different. If we have the same expectations on either sex, we’re not necessarily going get the same results. Girls learn differently from boys, they develop differently than boys. That's just a reality that political correctness tends to water down.”

Boys and girls aren’t the same, and boys need their own space, says the CEO of Trail Life USA.

Hancock believes some influential people are waging an “ongoing war on boyhood.” It started years ago but really ramped up in the ’90s with the way in which boys and girls were educated. We stressed math and science for girls, but ignored the boys. “We felt like [girls] needed to get better in science so we kind of changed the way we educated kids in order to favor girls,” explains Hancock. “As a result, we’re seeing a severe impact on the boys. It’s wonderful that girls improved in science and technology, but we ignored the boys in the process.”

Boys have distinct needs. They need good, solid leadership and clear boundaries. They want to know who is with them, who’s in charge and what their mission is. “And if you don’t get those things clear for boys, they’re going to create that structure in a way that looks like rebellion, or looks like resistance, or looks like apathy.” That’s why gangs are popular, Hancock explains. They provide that structure that boys need.

Boys are failing to become “winning, determined, focused men because we’re not letting them be fully boys,” Hancock says. “We’re producing a generation of unproductive, narcissists. They’re unproductive because we don’t expect anything from them and they’re narcissists because we don’t let them fail. We have to give boys opportunities to get out, to stretch their legs a little bit, and to achieve and to compete and to win trophies for being faster, for being stronger, for being better rather than just for showing up.”

We think that the drive and daring of boys is exactly what’s responsible for producing winning and determined, respectful, honoring men.

Trail Life USA gives each boy metaphoric tools to help him on his journey. A compass, which represents biblical values; a flashlight, which represents God’s Word; a guide, which represents his Troop and mentors; a map, which represents a peer who’s been there before; and a mountain, which represents a challenge. “We think that the drive and daring of boys today that’s being suppressed is exactly what’s responsible for producing winning and determined, respectful, honoring men and we need to let boys take on challenges and lose and win. Lose and learn from it and try again and win and find out they can do difficult things.”

‘We’re Doing Something Right’
So far, Trail Life USA has been successful — and they’re growing. They have over 30,000 members in more than 830 Troops in all 50 states. But the real wins are the stories from the field. From boys and men whose lives are changed to boys without dads, whose lives are being affected in a Christ-centered safe environment with father-like men to help them through the difficult times.

One young man from a broken home struggled until he found a Trail Life troop. He went on a backpacking hike and made it to the top of the mountain. He went home and told his mom, “I didn’t think I was going to make it, but I hung in there and I discovered if I worked really hard at something I can do it.” “That’s gold to a single mom,” Hancock says. “She sees her son take on something different and accomplish that. You’re not going to find that in many other places. So, we can point to those kinds of successes to say, ‘We’re doing something right here.’”

“Our social networking is around a fire with a hotdog on a stick,” he says. It’s not on Twitter or Facebook or Instagram. It’s talking with people face-to-face. And that’s powerful. If you can get boys in that kind of place, where they’re discovering the wonder and the beauty of the outdoors and just simple fellowship, it’s a good thing.”

Trail Life is a Christ-centered, boy-focused character, leadership, and adventure organization for boys and young men. It is “unapologetically Christian,” and tells the boys that the Bible is their compass that gives them their “true north.”