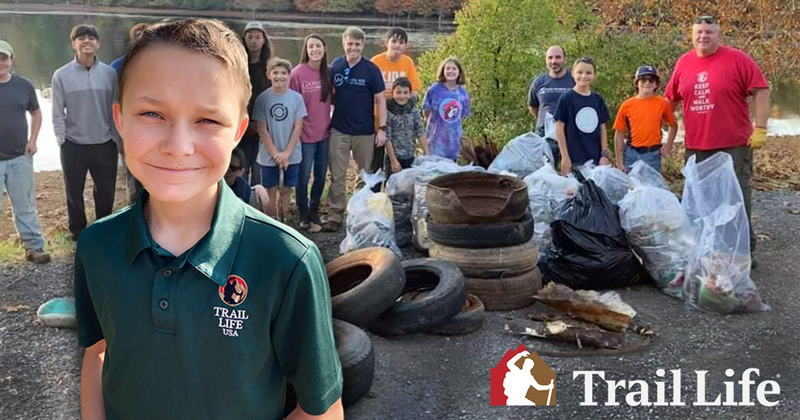 Trailman Nominated for Nickelodeon 'Kid of the Year' award

After learning his home town of Chattanooga is one of the most polluted cities in the world, 12-year-old Cash Daniels knew he had to do something.

Daniels began mobilizing and organizing various cleanups efforts in and around the Tennessee River. To date, Daniel’s efforts have helped remove more than 12,000 pounds of garbage from the river.

His efforts have received nationwide attention, including recently being named one of five nominees for the “Kid of the Year” award, in a partnership between Nickelodeon and Time for Kids magazine.

Daniels told Baptist Press he was glad to be nominated, but the main goal of his efforts is simply to help take good care of God’s creation.

“I was shocked when I found out I was top five out of thousands of kids and even though I didn’t win the whole thing, just being top five is a huge honor,” Daniels said.

“I got started because I’ve always loved animals and wildlife, especially fish and all bodies of water. It’s very important to take care of the Earth because God only gave us one Earth and God commands us to be good stewards of what He has gifted us. Once I figured out the Tennessee River was more polluted with micro-plastics than any other river in the world then I knew I had to do something.”

Daniels said he began researching about pollution as young as 6 or 7 years old. Over the next few years, he would spend hours mobilizing cleanup efforts and raising awareness about pollution through word-of-mouth and social media.

Examples of these cleanup efforts include organizing community outings to pick up trash from the Tennessee River, partnering with local businesses to help recycle aluminum cans and taking initiative to install fishing-line recycling containers along the river.

Additionally, Daniels wrote a book about his passion for taking care of the environment titled “One Small Piece” and founded an organization called “Cleanup Kids,” which encourages kids to fight against pollution.

Cash’s mother Erin Daniels said she initially thought her son’s cleanups efforts were great, but may just be a phase he was going through. She said that idea was “completely wrong,” and it was been fun to both watch her son’s passion grow, and also to grow as a parent.

“It’s been fun to watch him, and he just kept doing more and more things like researching and meeting other kids like him all over the place,” she said.

“We’ve learned a lot, and as parents, honestly we’re not the best at this. We didn’t recycle, we didn’t pay attention to how much plastic we used, and there were so many things that we didn’t do that we’re doing now.”

She said one of the highlights has been watching Cash use his passion to share the love of God with people.

“People focus on mission fields being oversees … but really the river in Tennessee is what we see as his mission field,” Erin Daniels said.

“That’s where he wants to be and make a difference. He’s met so many people who have heard his story just because that’s where he is. He’s on the river talking to fishermen and outdoorsmen who might not hear that side of his story in church. He gets to talk with people and share his story, his love for the outdoors, his love for God and for our church in a totally different way that some might not consider a mission field.”

Cash has partnered with in his cleanup efforts have been the Trail Life Ministry and the youth ministry of his church, Morris Hill Baptist in Chattanooga.

Austin Tibbetts, students and families pastor at Morris Hill, said he is “super proud” of Cash, who has involved other students from the church in cleanup efforts.

“I see he is passionate about the stewardship of creation and being a good steward of what God has created around us,” Tibbetts said. “I’m super thankful that he is in our youth group, and it has been cool to come alongside him as a youth group in the work that he’s already doing.”

Trail Life USA, is a church-based non-profit ministry focused on promoting character, leadership and adventure among young men. The organization has more than 800 Troops nationwide and the local chapter holds its meetings at Morris Hill.

Mark Hancock, Trail Life USA CEO, said it is amazing to see the way Cash is serving the community, particularly because being a good steward of God’s creation is one of Trail Life’s “six essential concepts of a Christian worldview.”

“We’re thrilled for Cash and we think Cash represents us well as an organization in the work that he’s doing,” Hancock said.

“To see Cash displaying this type of leadership in his community both within his troop and with others in the community really speaks well of him as a young man. We’re excited that he’s displaying these leadership skills as one of our Trailmen.”

When asked what has been the biggest challenge in his cleanup efforts, Daniels said, with a laugh, that he is a kid and can’t drive himself anywhere.

Despite the limitations that may exist for kids, Daniels encourages kids of all ages to follow their passions and take action to make a positive impact in the world.

See the original article in the Baptist Press